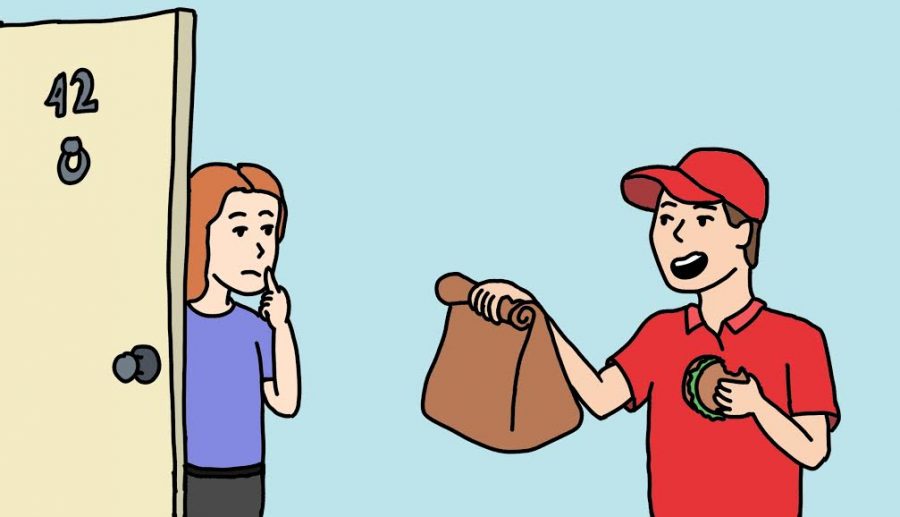 It’s safe to say that people have seen a decrease in face-to-face social interactions this year, which is something we’re not exactly used to. Especially as college students, we are accustomed to seeing a hundred different people every single day and night while also living with a roommate and hall mates. Isolation is foreign for many of us. This has extended throughout the entire community and has been observed all throughout the United States since March. However, some people are handling it differently than we may expect.

I promise you will not guess the topic on which I am about to enlighten you: weird DoorDash and other food delivery worker encounters.

“Over the weekend, my friends and I ordered some DoorDash because none of us wanted to drive to get it. But when the delivery guy texted us saying he was at our building, he had sat himself down in front of the door and started eating my food,” Patricia Eats ’22 said. “As in, half of my fries were gone and my burger had magically disappeared. Then he yelled at me for getting onions on my burger.”

“I had a horror story with an Ubereats driver the other week. When she came to drop my food off, she just started crying and hugging me. I was pretty confused, so I asked her what was wrong and she told me I’m the first person she’s seen in a very long time because she lives with her 13 cats and always just drops the food off and picks it up without seeing people,” Alex Driver ’23 said. “Her words, not mine. Safe to say I had no idea what was going on and wrote it off as me being too drunk.”

“Grubhub seriously needs to get less weird drivers. In the time I’ve been back at the University, I’ve had Grubhub three times and I’ve had three weird encounters. The first one asked me what my favorite sleeping position was. The second one asked me if I liked birds and I said yes and he said, ‘Why? I hate birds.’ Then the last one asked me if I could give him one single ketchup packet so we can use it for his eggs when he gets home. I said no because eggs and ketchup don’t go together, but you catch my drift,” Kevin Mustard ’21 said.

One time when I got Postmates, the man texted me “Bones” and nothing else. So now I don’t get Postmates anymore. Hopefully, there are fewer weird food delivery stories after the caf improves their food and things take a turn for the better.