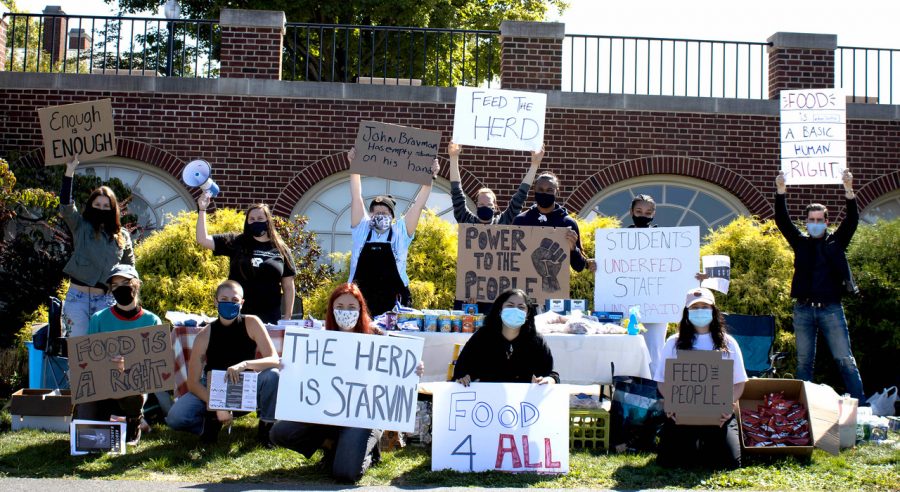 A group of students, faculty and community members hosted a breadline action outside of Freas Admissions Hall to raise awareness for food insecurity at the University. The coalition comprised participants from several groups, including Green New Deal Lewisburg (GNDL), the Bucknell University Democratic Socialists (BUDS), the Food Security Council and Bedtime Radicalism. This Sept. 22 protest comes after weeks of student outrage since the University’s announcement that they would be increasing the price of their meal plans, which are mandatory for all students living on campus.

The action saw organizers wearing masks and plastic gloves, handing out pre-packaged foods such as bread, granola bars, canned goods, chips and water — all of which were donated by faculty and students and given away for free. Many participants held signs with slogans such as “Feed the People,” “The herd is starving,” and “Food is a basic human right.” Oftentimes group members broke out in chant, among the most popular being “$1,400 a day is not okay” and “1, 2, 3, 4, Bucknell needs to feed us more.”

“This is basically an homage to what was happening in the 1930s during the Great Depression, and how people who were going hungry and were poor would quite literally stand in breadlines in order to get what they wanted from the government,” Kaitlyn Ferentini ’21 said on the choice to create a breadline. “I’m out here because I love Bucknell and I want to make Bucknell better.”

“We’re here because two weeks before the start of the semester, the University told us that they were taking the cheapest meal plan and doubling it, with no chance to opt-out and only offering folks one meal a day with it. We think this is outrageous, especially in the middle of a pandemic,” Mary Collier ’21, an organizer for GNDL, said. “We thought that this direct action would be great because it was a way to feed the people and do mutual aid work while at the same time causing some disruption and awareness right where the administrators can see us.”

Along with food, organizers handed out the second issue of “Bedtime Radicalism,” a zine created by a group of anonymous community members which highlights issues of racial and environmental injustice. Coordinators also distributed a pamphlet that included statistics on food insecurity both nationally and at the University, complete with anonymous student testimonials.

While the breadline was primarily organized by student activists, many faculty members assisted in the planning of the action and even donated food. “People have the right to eat. With COVID-19 there are new challenges to providing food on campus, but food insecurity at Bucknell is unfortunately not a new problem. The University administration has a responsibility to make sure that our students are not hungry, and I would like to see them listen to these students and act immediately to address this problem,” Associate Professor of Anthropology Clare Sammells said. “How can we claim to ‘educate our students to serve the common good and to promote justice’ (Bucknell’s mission statement) if we can’t even feed them?”

Associate Professor of Environmental Studies and Sciences Andrew Stuhl, who also assisted in coordinating the breadline, echoed this sentiment. “We are witnessing unprecedented food insecurity in the midst of a pandemic. According to the recent survey on student hunger from the Biology Department, more than 60% of student respondents report not having enough food, every day. That is heartbreaking,” Stuhl said. “What’s more upsetting, though, is that University administrators have known about this issue. They have heard student testimonials about fainting, malnutrition, and skipping meals. Yet they have not taken action to make this campus food secure today.”

In the early morning hours of Sept. 22 — the same day the protest was to take place — University President John Bravman announced the creation of a Food and Nutrition Task Force composed of students, faculty and members of the administration.

“This group will guide improvements to normal (non-pandemic) operations of dining services moving forward,” Mike Ferlazzo, director of media relations for the University, said. “Effective immediately, the new Food Insecurity Relief Fund will support programs and students who are experiencing food insecurity by providing resources such as items for the B-Eats food pantry.” The University encourages students to visit the B-Eats pantry in the Elaine Langone Center if necessary or to reach out to the Office of Financial Aid if they are struggling with any financial hardships.

While Stuhl appreciates the concession, he feels that such a response is not as immediate as is needed given the severity of the situation. “That’s a welcome step for long-term planning and it should absolutely go forward. Yet, the Task Force’s charge explicitly states it focuses only on non-pandemic times. And recommendations won’t be ready until February. We need solutions right now. Actually, we needed them a month ago. That’s why I support a direct action like a breadline — directly feeding the people who need food to stay healthy, learn, and thrive,” Stuhl said.

Students who attended the breadline, such as Bethany Johnson ’21, felt similarly about the administration’s response. “[The administration] announced that they were creating a task force this morning even though it’s week six of us being on campus. This task force does not have any real goals to be set until February 2021, which is past the start of the spring semester, which means that they don’t even have plans to fix food insecurity or the quality of food on campus right now,” Johnson said. “This breadline is amazing. It’s a great way to protest and raise our voices, and show that we’re not going to be silenced and that the task force is not enough.”

In addition to advocating for changes to the meal plan, the breadline action highlighted other existing solutions for the University to put in place, such as Swipe Out Hunger and Operation HUnGER.

Swipe Out Hunger is a non-profit organization that partners with students at colleges and universities across the country to alleviate food insecurity. Students have been advocating for a program similar to the Swipe Drive model, wherein the University would create a fund of unused meal swipes and dining dollars for others to withdraw and use if needed. On Sept. 23, during a meeting with an organizer from GNDL, Provost Elisabeth Mermann-Jozwiak expressed that the University would be holding a meeting to begin the process of implementing Swipe Out Hunger.

A group of students and staff coordinated by Professor of Education Sue Ellen Henry has also created the Helping UnderGrads Eat Regularly initiative (Operation HUnGER), which has focused on creating a GoFundMe whose donations will be used toward purchasing grocery store gift cards from Weis or Giant for students facing food insecurity. Since its creation early last week, Operation HUnGER has raised over $8,000 to re-distribute to students; those who are seeking gift cards can fill out a registration form and request a specific store, dollar amount and frequency with which they may need to receive the cards.

“The first reason we created Operation HUnGER was because the University did not have a response to the issue of food insecurity, and people were going unheard. We wanted to do some form of initiative to support students backed by students, with faculty to guide the process,” Julian Ricketson ’21 said, a member of the newly founded Food and Nutrition Task Force and one of the students behind Operation HUnGER. “It’s time for us to see an initiative that actually works instead of one that just puts a band-aid on the problem.”

Editor’s Note: A previous version of this article stated that Provost Mermann-Jozwiak announced the University’s intention to implement Swipe Out Hunger. The article has been updated to make clear that this announcement occurred during a Sept. 23 meeting with an organizer for GNDL, as an official statement has not yet been made to the larger campus community.