Editorial: An aggravating election and an uncertain future 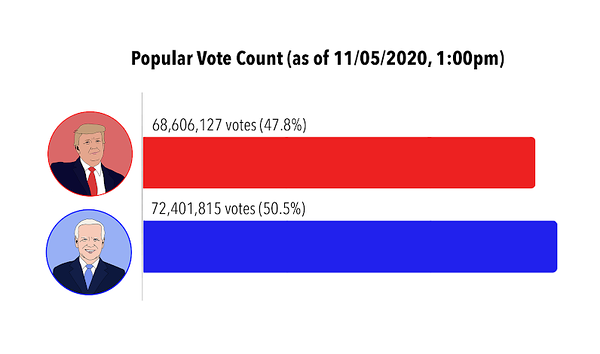 It is possible that the 2020 presidential election will not be over by the time this piece is published; there is still so much we don’t know, so much that remains up in the air, so many apparently inexplicable dynamics and bizarre polling errors yet to be elucidated. It is likely that we will be figuring out what this election means for a very, very, very long time. So instead, let us focus on what we truly do know and can conclude at this present moment.

From the current returns being released from Pennsylvania, Georgia and Nevada — all undecided races at the time of writing —along with the called victories in Michigan and Wisconsin, former Vice President Joe Biden looks poised to win both the popular vote and the Electoral College in the 2020 election. This victory is, however, in no sense a resounding one; Trump garnered in excess of 66 million votes and over 200 electors, deeply subverting the Democratic desire to repudiate “Trumpism” as a political and moral philosophy. The fact that the election was a nail-biter instead of a decisive victory is, in our view, a deeply shameful reflection of both the state of our nation and the strategic acumen of the Democratic Party. An incumbent who oversaw a mass death event claiming over 225,000 American lives, the deepest recession in nearly a century, family separation and constant and inhumane crackdowns on innocent protestors should be profoundly easy to defeat in a general election; the fact that the Biden campaign ignored its quite conspicuous issues with potential Latino and Black turnout (and, indeed, made a point of excluding them from their “path to victory”) cost them Florida and large swaths of Texas.

Notwithstanding the campaign’s major failures, however, it is particularly disgraceful to see all of the aforementioned chaos lead to higher Trump turnout than in 2016. It represents a large constituency of this country who is, at best, unconcerned with systemic racism, economic inequality and their own personal health and safety, and at worst, one which is actively hostile to a critical examination of those issues. A president who has quite literally threatened to undermine the democratic process — the American value par excellence, though evidently one of the few on which Trump’s base of support is happy to compromise — should not be this difficult to reject outright.

But it was. And the most dedicated fringes of this group will be the core of Biden’s dilemma as, in all likelihood, the next President of the United States. Biden will have to find a way to work with a massive constituency of fiercely ideological, authoritarian and conspiracy-prone American citizens, many of whom hold their sole political goal to be “owning the libs.” He will have to restore our confidence in the institutions Trump has dismantled and hollowed out for personal gain — the federal courts, the executive agencies, the Justice Department and Treasury and so on — while tackling a hyper-partisan Supreme Court, split legislature and a citizenry which provides no clear mandate for Biden’s political platform. This is the unfortunate reality of the next four years and will haunt his presidency unerringly.

Moreover, Biden’s own defects as a politician and leader only further exacerbate the difficulty with which this country can not only recover from the past four years, but can achieve true progress. While many may see a Biden presidency as an end to an uncharacteristically intolerant and oppressive administration, doing so ignores the many policy failings Biden himself has had — failings that have served to deepen the pervasive systemic inequalities that already existed in this country. Whether it be his past racist policies, his denial of universal healthcare or his refusal to adopt a Green New Deal, it is more than evident that Joe Biden’s neoliberal politics will not be the end to this country’s failings, and simply ‘returning to normal’ would be an offense to the highest degree. Normal in the United States has always actively excluded and oppressed the most marginalized communities; while Biden and his supporters have campaigned on a message of unity, these injustices will not disappear with a Biden presidency. Regardless of the outcome of this year’s election, we must continue to mobilize for racial, economic and climate justice. No matter how difficult that road may be, it will be necessary for our country to walk back from the brink of destructive conflict, to bridle accusations of fraud or electoral dishonesty and to organize along the axes of our common economic and material concerns to agitate for lasting change.