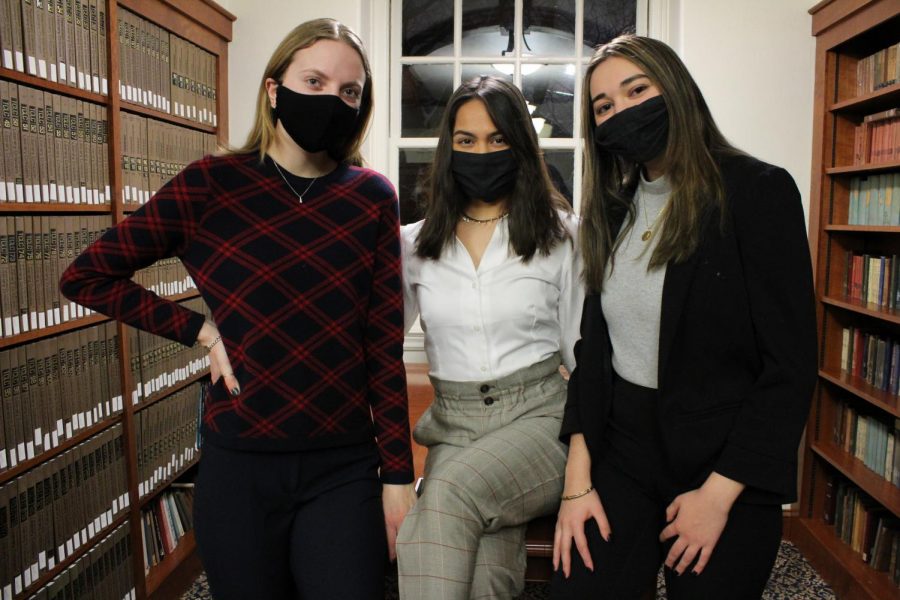 The Bucknell Student Government (BSG) is a motivated and mindful group of undergraduate students who serve to represent the student body. As the bridge between said student body and the administration — and between smaller groups of students, faculty/staff, departments and other key members of the University community — they are responsible for keeping tabs on the pulse of all these groups as well as facilitating communication and pushing for action. As members of the University community, it is important to recognize and highlight the individuals that make up this team.

Scopano is a junior from York, Pa. She is majoring in neuroscience with a French minor. In addition to serving on BSG, she is a Religious & Spiritual Life student manager, neuroscience researcher, Rooke Chapel vocal ensemblist and is involved with DSAC, MSF, Dance Marathon, Food Security Council and Pre-Health Society.

Scopano shared that she was heavily involved in student government in high school so it seemed natural for her to continue in college. She first became involved with BSG during her first year as a Class of 2023 senator and Academic Affairs Committee member. She ran for class president during her junior year.

“Running for President started out more extrinsically-motivated, as a lot of my peers in BSG had urged me to run,” Scopano said. “It then became more intrinsic as I realized there was still so much change I wanted to see in our Bucknell community, but I realized there was no use in talking about the change I wanted to see if I wasn’t going to take advantage of the opportunity for a position that would readily permit me to act out and see that change come to fruition.”

Scopano describes her position as a “catch-all.’” She acts as the liaison between different departments, administrators, faculty/ staff, Board of Trustees and students; she assesses and addresses the needs of each group to better serve our community.

Speaking on the purpose and importance of BSG’s role in the University’s community, Scopano said, “As in our preamble, we are to establish justice, ensure campus tranquility, and promote the general welfare of students. This comes with representing all members of our Bucknell community and making sure everyone’s needs are met.” She went on to say that “currently, this has become working on our conscientiousness and activism of the DEI work this institution needs, creating ways to better student health (physically with COVID-19, mentally and safety-wise), addressing food insecurity, and much more.”

As President, Scopano aspires to be a present, honest and compassionate leader.
“I am an advocate in leading with kindness, and my heart to be on my sleeve in that you know who I am, as an individual, along the way,” she said. “Our executive board strives to be communicative with one another, Congress, and our greater student body. We also strive to get work done, effectively and efficiently, while listening to others about what work needs to be done next. As for the Bucknell community-at-large, we are living in an unpredictable era of time, and listening to the tragedies around the world has been frustrating and draining. I just wish everyone to be kind to one another and be kind to themselves,” Scopano said.

Scopano went on to say that, “inevitably, COVID-19 has been our biggest challenge. Learning how to circumnavigate a remote-centric time in order to complete initiatives and meet with people has been difficult, but we are ready to tackle the challenges ahead nonetheless.”

Scopano concluded that her favorite part of BSG are the connections she created with fellow members of the BSG board. “Not only do you get an opportunity to network and connect with head administration and faculty/staff, but you are surrounded by highly-motivated, passionate individuals who were elected to serve as representatives of the student body. The ambition that moves through all BSG members is like no other, and I have been honored to serve as President and work more closely with everyone in the organization,” Scopano said.

Bixby is a junior from New York City; she is an applied mathematical sciences major with two minors in linguistics and classics.

“I decided to run for BSG because I wanted to see more visible involvement with BSG on campus,” Bixby said. “I also felt like since I had never been involved with BSG before running for my position, that I would have a fresh perspective to contribute.”

As VP of Operations, Bixby oversees a lot of the logistics of BSG. She runs elections in the fall and spring, appoints people to committees and sits on a few committees herself, like Planning and Budget and the President’s Sustainability Council. She also serves as the chair of the Organization Review Board that oversees all clubs and organizations on campus.

“My personal goal for the semester is just to make sure BSG runs smoothly and respectfully,” Bixby said. “As for the Executive Board, I think we’re all trying to do the same. We all chose to run for our positions because we want BSG to make progress as an organization and we’re all very dedicated to making that happen.”

Bixby explained that many of BUSH’s accomplishments require a great amount of behind-the-scenes coordination. “From making a better class schedule to working toward a low waste campus, there is so much that BSG does that people just don’t get to see on campus. I think all the small things we do really make Bucknell a better environment, even if it’s not all super publicized,” she said.

“I expect BSG to pose many challenges because I’m learning how it works as I go. I’ve got a great team to help me out, but since I’ve never been a part of BSG before there’s a lot of small stuff that I don’t know off the top of my head. I think really well on my feet and I’m excited to work through any challenges I’m faced with,” Bixby said.

“The best part about BSG is the people, so many new perspectives and people I’ve never met before who I now get to work with all the time,” Bixby said.

Guichardan is a sophomore who lives about an hour away from a little town called Drums. She is a psychology and political science double major with a legal studies minor on the pre-law Track. In addition to her involvement in BSG, Sophie is also a part of the school’s mock trial team, a member of Greek Life in Chi Omega, and works at the front-desk of Bertrand Library.

When asked why she ran for BSG, Guichardan said, “I figured, why not?” She went on to say how she loves the University’s student body so much that she wanted to be able to represent them. “I know there is a lot of positive change we can achieve on Bucknell’s campus and I wanted to help be a part of that. I chose to run for VP of Administration specifically because I felt like it was the position best suited for my personality and my strengths.”

In her role VP of Administrations, Guichardan is in charge of a lot of the logistics of BSG and is often working behind-the-scenes to try and keep things running smoothly. “During our weekly Congresses, I’m in charge of compiling the minutes as well as being in charge of all of BSG’s major record keeping,” Guichardan said. “I sit on a variety of different BSG Committees such as Executive Committee and Finance Committee while also acting as the Chair for BSG’s PR Board.” Part of her role also includes being in charge of all of BSG’s social media, including their Instagram, Facebook and website. Furthermore, their Executive Board often has meetings with different members of University administration. “I also hold Office Hours twice weekly for anyone interested,” Guichardan said.

In Guichardan’s opinion, “BSG plays a greater role in Bucknell’s community to help try and nourish a unified student body by addressing issues pertinent to campus.”

“Going into this year, my main goals in my position are to be a friendly face that all students can feel comfortable enough to take to with any issues and to never let any voice go unheard,” Guichardan said. “I hope we can create an environment that encourages the Bucknell community to speak up and be passionate about their campus by being willing to have the conversations we need to have to see change.”

“Personally, I am constantly wanting to make people happy so one of my greatest individual challenges is balancing my desire to fix everyone’’ concerns while still remembering we don’t have the ability to do everything. I want to be able to address every single person’s problems but it is important to realize that it’s not always possible,” Guichardan said.

In terms of challenges they face as an entire organization, Guichardan shared that “adversity is something we all have to address head-on and the best way to do that is to be caring and thoughtful of each other when things don’t go as planned or when someone disagrees with you. These disagreements and conversations are not things we need to run from but rather tackle head on and learn from.”

Our VP of Administration concluded by sharing that “being a part of BSG has really allowed me to feel so much more connected to the Bucknell community than anything else I’ve ever been in. I’ve gotten to know a wide variety of students who really care about making a difference on Bucknell’s campus and have had the opportunity to see change come to fruition. It makes me feel so much closer to the student body which makes my college experience that much more meaningful.”