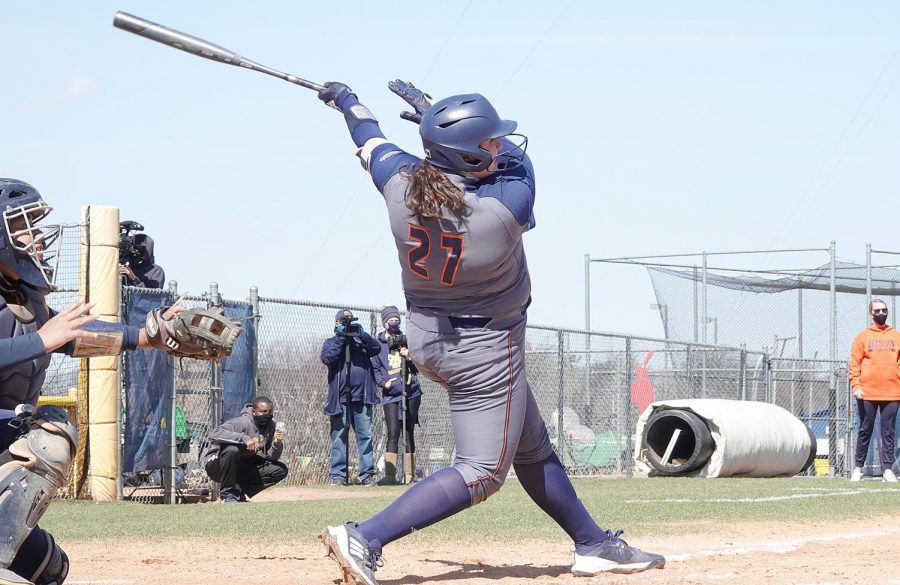 It was a tough weekend for the Bison softball team, especially at the plate. In four combined games, the Orange and Blue managed just 13 hits to Army’s 31, falling 3-0, 5-0, 3-1 and 3-2 in a series of low-scoring affairs.

In game 1, the Bison fell by a score of 3-0. Army jumped out to the 3-0 lead early on, and the Bison bats were stymied by the Army pitcher, who had a no-hitter going until the final inning. Sarah Baluch ’22 managed to break up the no-hitter and recorded the lone hit for the Bison. Olivia Marinelli ’23 started the game for the Bison, giving up six hits and three runs over three innings. Kelly Toomey ’22 provided solid relief in the final three innings, giving up just two hits and allowing no runs while striking out three.

The Bison were unable to score again in the second game, losing 5-0. The Bison posted three hits in the first two innings, but failed to capitalize on the base runners. Kaiya Burton ’23 pitched five innings, with four earned runs.

The Orange and Blue were able to get on the board in game three, but lost by a score of 3-1. Toomey was called on once again for the Bison, pitching all six innings while striking out five and allowing seven hits. Jazmyn Stokes ’21, Jess Hom ’21 and Baluch all recorded hits in the contest.

The fourth game was a close contest, with Army squeaking out a narrow 3-2 victory. Baluch stayed hot at the plate for the Bison, going 2-4. Taylor Wolfgang ’22 had the lone RBI on a single in the bottom of the sixth, and a wild pitch saw the Bison cut the lead to just one, but the comeback ultimately fell short and the Black Knights secured the series sweep.

“Unfortunately, our team has hit a bit of a slump in the offensive area and we are just struggling to push across runs. So the cards didn’t fall our way. However, we are not a team that just throws in the towel. After a tough weekend, we had an off day on Monday and then got right back to work on Tuesday,” Wolfgang said.

The Bison close out the 2021 campaign with four games opposite Colgate, starting with a home doubleheader on Friday, May 7 scheduled for a 2 p.m. first pitch.