The Bison Field Hockey Team had a Competitive Weekend 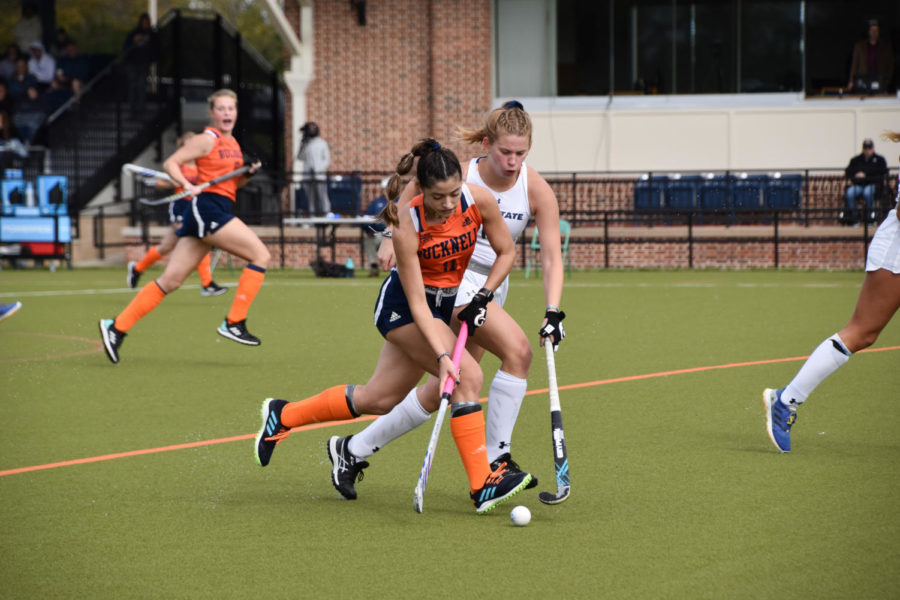 The Orange and Blue field hockey team had a pair of games this weekend, going 1-1 in the weekend. The Bison beat the Lehigh Mountain Hawks 6-1 on Saturday at Graham Field, but fell on Senior Day against nationally ranked Kent State on Sunday by a score of 2-1. The Bison now sit at 7-7 overall and 3-1 in Patriot League play.

The Bison scored on four of five penalty corner attempts after the Mountain Hawks took a 1-0 lead early in the competition. Six unanswered goals were scored, led by Noor Kaur ’23 having a program record of five assists within one match.

“The weather was a really big challenge for us. It made it a lot more difficult for us to connect passes. I thought it was really special to get a win on senior night and I think we really have a chance to win the Patriot League again this year,” Kari Melberger ’24 said.

Goalie Clara McCormick ’23 finished the match with four saves, leading the Bison to the win.

The Bison hosted an out of conference match against No. 24 Kent State on Sunday, while celebrating Senior Day. The seven seniors were celebrated in a ceremony before the match began.

Kent State was the fifth ranked opponent the Orange and Blue have faced this year. It was a scoreless first quarter between the Bison and the Golden Flashes.

The Bison led the game 10-4 in shots and 5-0 in penalty corners, but the Bison gave up two goals in the second quarter of play.

Erin Zielinski ’22 scored her first career goal with about 10 minutes to go in the fourth quarter to make the score 2-1.

The Bison had one more corner attempt and three more shots in the final nine minutes of play, but were unable to tie the game before the final whistle sounded.

The Orange and Blue host Colgate on Friday Oct. 22 in another Patriot League contest to determine their postseason rankings going into playoffs. The Bison have already clinched a postseason spot following their victory over the Lehigh Mountain Hawks on Saturday.