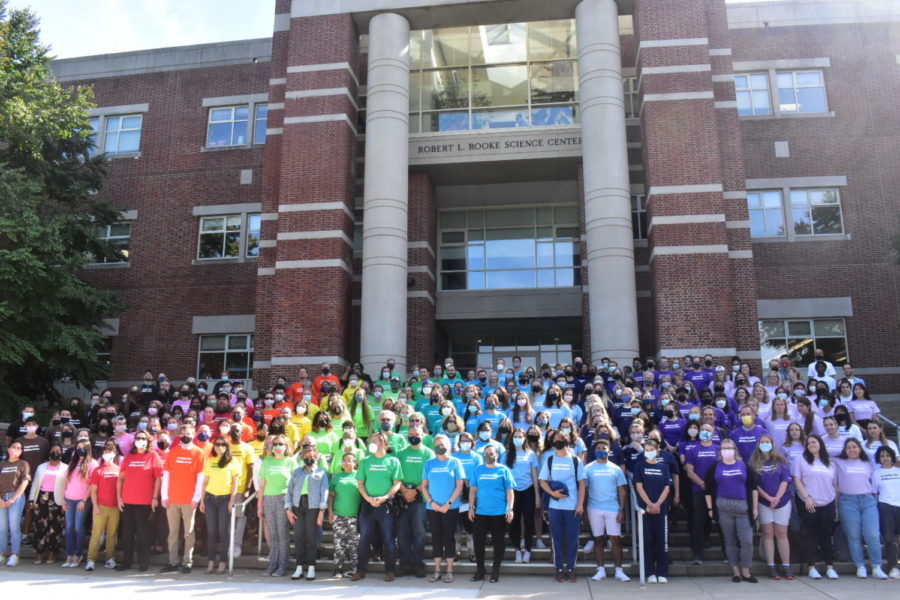 Monday, October 11 was International “Coming Out” Day, a holiday celebrating self-disclosure of one’s sexual identity and orientation first commemorated in the United States in 1988. The celebration now occurs annually on and off campuses across the globe, with an especially significant prominence at undergraduate institutions like the University. In celebration of LGBTQ History Month as well as International Coming Out Day, the University’s Office of LGBTQ Resources sponsored a “Celebrate Difference” t-shirt campaign and community photo on Thursday, October 14.

The Office of LGBTQ Resources handed out free t-shirts to all students and faculty who wished to show their support for the community in this way. T-shirts were available in the LGBTQ Community Center leading up to the “Celebrate Difference” campaign on a first come, first serve basis; individuals simply had to visit the office, located on the second floor of the ELC, to pick their color and sign their name. Members of the community were encouraged to wear their t-shirts on Thursday and join the group photo at noon. As in past years, the photo was taken in front of Robert L. Rooke Science building opposite the Elaine Langone Center on Dent Drive.

This visible show of support was especially timely after an incident at Fran’s House last year shook the campus community, leaving many LGBTQ students feeling unsafe on campus. Over 100 students, professors and other faculty gathered this year for the photo. These individuals could also be seen walking around campus and attending classes in their colorful shirts that day. Overall, the presence of those wearing the ‘Celebrate Difference’ t-shirts served as a reminder of the support for the LGBTQ community in the University community and beyond.

Emma Stone ’22 reflected on her decision to participate in the photo, sharing her thoughts on the importance of safety on campus for members of the LGBTQ community. “As someone who navigates our campus with privilege, I felt it was very important to visibly express my allyship and support. I want my friends, classmates, and peers who identify with the LGBTQ+ community to feel safe and supported in the spaces at Bucknell.” Stone concluded by stating that “the “Celebrate Difference” photo is one step each year towards making that happen.”

In addition to LGBTQ History Month, October is also recognized as “No More Month,” a time to reflect on and raise awareness of sexual assault and sexual violence particularly salient on college campuses. SpeakUp is sponsoring a host of events to encourage campus members to get involved in this important time. Annually visible throughout Bertrand Library, for example, is the results of the Clothesline Project; students and others are encouraged to write messages of support, allyship and awareness on shirts that will be displayed across the campus. Other examples can also be seen throughout the ELC Mall.

This past Thursday, October 21 was “Purple Thursday”; individuals were encouraged to wear purple to show their support and allyship for victims and survivors of sexual assault or violence. Lastly, on the evening of Thursday, November 4, the University will be hosting its annual Take Back the Night event, where students will gather to stand against sexual assault. There are usually student speakers as well as songs and poems performed.

Katelynne Schmitt ’22 spoke to The Bucknellian about the importance of the celebrate difference campaign and its impact on the LGBTQ community. “The “Coming Out Day” photo is always a super important opportunity for the LGBTQ+ community (and for allies as well) to make ourselves visible, take up space and fill it with pride at Bucknell,” she explained. “It’s a moment where queerness is embraced and celebrated, a blip in time where identities that are normally silenced and expected to fly under the heteronormative radar emerge. In that moment I stood—not alone, (which is how it can feel at times) but surrounded by friends, allies, faculty/staff, peers and fellow queers—unapologetically.”