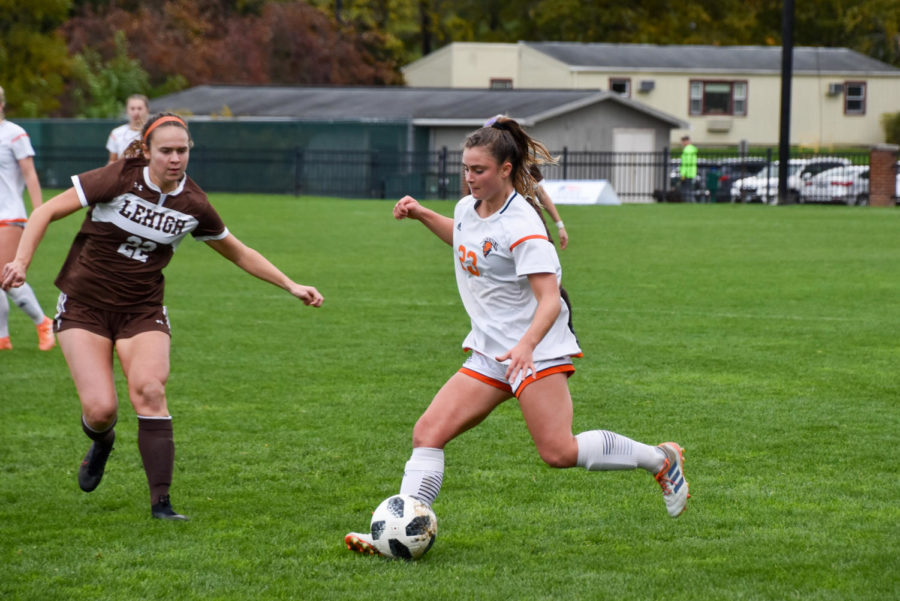 Women’s soccer started their Patriot League playoff campaign strong, winning their quarter-final by beating Lehigh 2-0 at home on Sunday to set up a semi-final away to Navy.

The Orange and Blue took the lead at the start of the second half when Teresea Deda ’25 set up Hannah Stuck ’24 for her first collegiate goal. Deda came into the game seventh in the nation in assists and racked up her twelfth of the season. The Bison then extended their lead with about 10 minutes remaining when Rylee Donaldson ’23 was taken down in the box, and Claire Mensi ’22 saw her penalty saved, but finished it on the third attempt.

The Bison finished with a 22-18 shot advantage in a wide-open game, where goalkeeper Jenna Hall ’24 made seven saves, including several great stops to keep the shutout and secure the win.

The game was their second game against Lehigh that week, having closed out the regular season just four days earlier with a 1-0 overtime win over the Mountain Hawks.

“It was difficult to play Lehigh back to back just because we knew they would come out strong after our overtime win the previous Wednesday. Moving on to the semifinals is huge for us and we are feeling confident going into Thursday after playing really well as a team against Lehigh,” Donaldson said.

Before the game, Donaldson was presented with her award for Patriot League Offensive Player of the Year, with a league-leading 10 goals so far this season. She was also named to the All-Patriot League First-Team.

Donaldson was one of five players who received all-league honors earlier in the week, the most since the Bison won the Patriot League in 2017. Deda was also named in the All-Patriot League first team, Mensi was named in the Second Team, and Hall and Abby Gearheart ’23 received Third Team honors.

“Being named Patriot League Offensive Player of the Year was a huge accomplishment for me. I was super excited to receive the honor, but could not have done it without my team. The key to goal scoring is having a great team that knows my strengths and puts me in dangerous areas to put the ball in the back of the net. Each goal I scored came off of a great pass and great build up through the team,” Donaldson said.

The Bison now travel to Annapolis, Maryland on Thursday to play second-seeded Navy in the Patriot League semi-finals, who they beat 4-2 in their opening game of the season. The game will be played on Nov. 4 at 6 p.m.