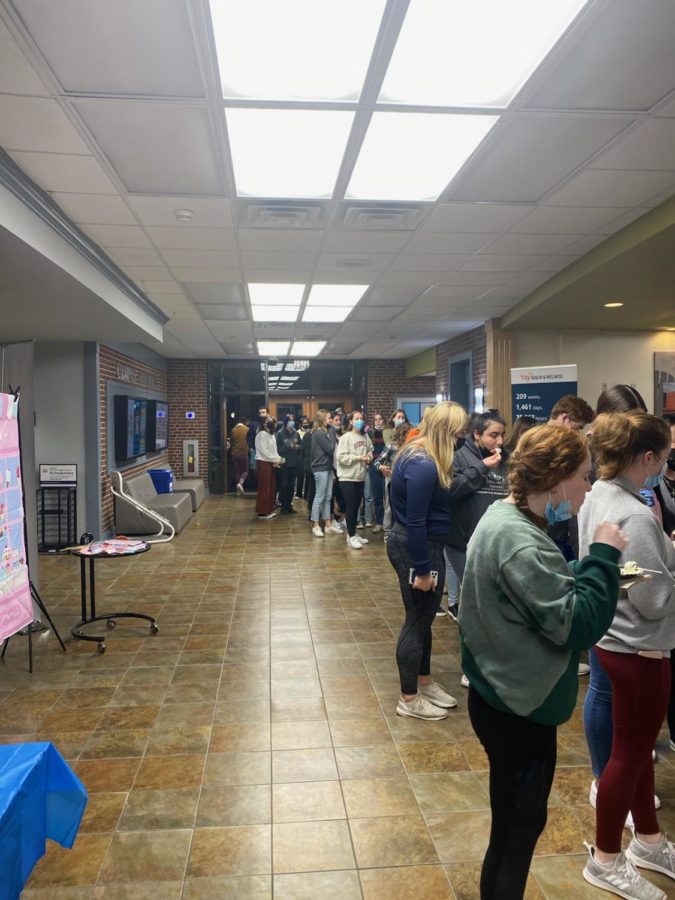 This year’s Just Desserts, an all you can eat and make dessert event hosted by CORE, was held at the ELC Mall on Nov. 12, and featured fruit kabobs, cake pops, ice cream sandwiches and the classic candy sushi.

CORE, under the guidance of assistant director of Campus Activities and Programs Sarah Herberger and the CORE advisor, worked closely with University dining services to organize the event. They focused most of their attention on which desserts to bring, considering successes from past years and their new ideas in the process.

“Candy sushi – I did not know [it] was a staple at Bucknell Just Desserts,” Maya Sabatier ’24, an Executive Planner for CORE, said. “I found that out through the planning process but that was definitely a big shock for me. It sold out, everyone loved it. Cake pops were a new thing, the fruit kabobs we came up with, and then the customizable ice cream sandwiches were also a new thing that came with it.”

While typically held at Uptown, this year’s Just Desserts was held at the ELC Mall. Organizers found this change of location led to a much larger turnout than in years past. With tables of build-your-own desserts lining both sides of the Forum, there were many options to choose from and still room to sit and spread out. Enough people were there early that they decided to start the event five minutes earlier than planned. People also stopped by to grabbed dessert on the way to other places.

“The ELC was a great place to host Just Desserts. My friends and I came straight down from dinner, grabbed candy and hot chocolate, and found a table at the Bison to sit and talk” Caiden Covell ’25 said.

The cake pops dipped in icing and covered in a sprinkle of choice were the quickest to go – all 150 were gone within the first 20 minutes. While all of the rest of the supplies lasted the duration of the event, the majority of the people came in the first 45 minutes to ensure they got the desserts they wanted. By the end there was some of everything left, except for the cake pops.

“My favorite dessert at the event was definitely the ice cream sandwiches,” Josh Dewey ’25 said. “There were a lot of choices for both cookies and ice cream; I had sugar cookies with vanilla ice cream, which was basic but you also can’t go wrong.”

“Leading up to Thanksgiving Break my classes have really been picking up and I’ve had a lot of work, but Just Desserts was a nice way to spend time with my friends and destress heading into the weekend,” CORE member Morgan Haros ’25 said.

Attendees weren’t the only ones that considered Just Desserts a success.

“[CORE plans] all of the events that go on on campus and it has been a really fulfilling club to be a part of, because I feel so much more connected to the community. This event showed how much we can do in the community with just a small thing and just bringing out desserts,” Sabatier said. “There were a lot of people hanging out in the ELC mall that I don’t normally see, so that was really exciting to see. People who don’t normally come to CORE events came to this one.”