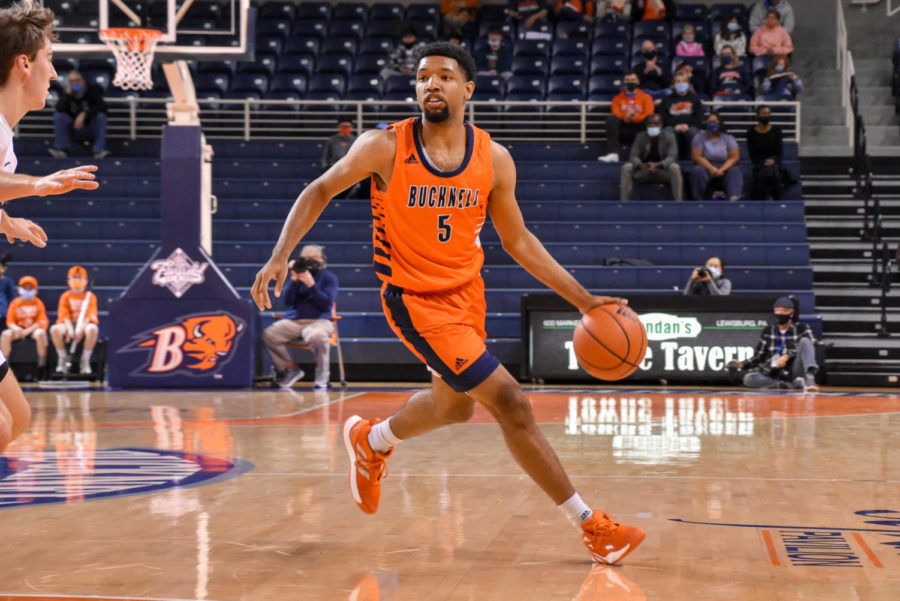 After 622 days since the last game with fans in the stands, the Bison men’s basketball team returned to Sojka Pavilion on Sunday, Nov. 14 to face the Penn Quakers. The game remained even throughout both halves of play, but the Bison could not outscore their competitors. The game ended 73-68 in favor of Penn, causing the Bison to fall to 0-2 on the start of the season.

The contest was evenly matched throughout, with neither team leading by more than seven points. While the Quakers held a close 34-32 lead at the half, the Bison came out on fire in the second half. A little over four minutes in, senior guard Andrew Funk hit three triples, leading the Bison to a 43-37 lead.

The game remained close throughout the rest of play. With less than four minutes left to play, junior guard Xander Rice tied the score at 60, but there were still plenty more points to be scored before time ran out. A few Bison turnovers led to Penn points, but the Orange and Blue were able to lessen the deficit to three off of center Alex Timmerman’s ’23 three-pointer with nine seconds left on the clock.

Despite the loss, there were many notable Bison performances, especially from Funk, who scored a career-high 32 points in the home opener. Out of those 32 points, 30 of them came from three-point plays. First-year guard Elvin Edmond IV added 10 points of his own to the scoreboard, while Timmerman scored 7 and Rice scored 6 points.

When asked about the outcome of the game, Funk remained very optimistic: “It’s always great to play at home in front of students and fans. Although the result wasn’t what [they] wanted, there were a lot of good things to build on. [The team] plays a lot of very good teams during the non conference schedule so they can continue to improve,” Funk said.

When asked about how the team as a whole is looking this season, he said that they “have an exciting group with a high ceiling, and if [they] work to get better with every practice and every game, [he] believes [they] will be very successful come the end of the season.”

Still very early in their season, the Bison have plenty of time to rebound. The Orange and Blue look to earn their first win of the season on Wednesday, Nov. 17 as they host Rider University at 7 p.m. in Sojka Pavilion.