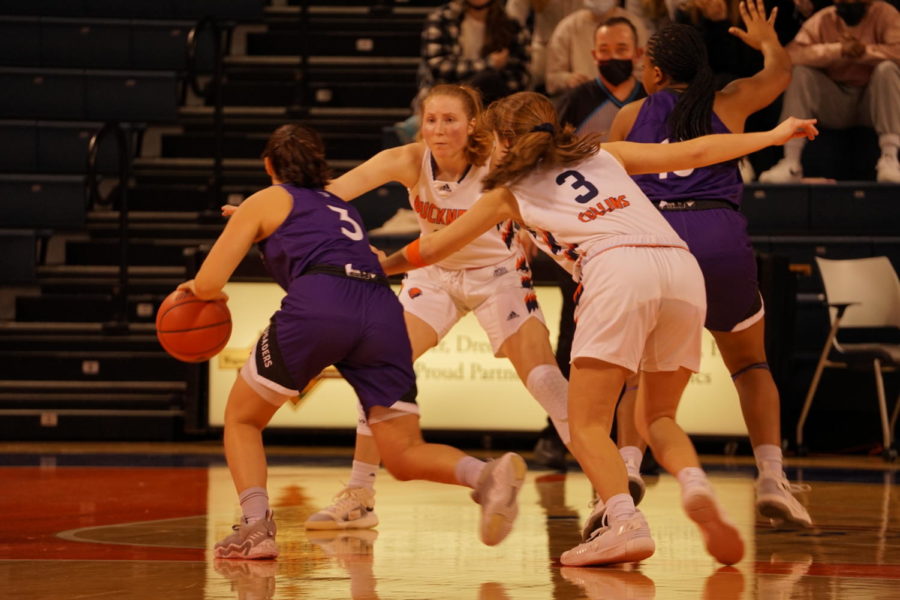 The Bison’s women’s basketball team hosted the Holy Cross Crusaders at Sojka Pavilion this past Saturday. After four hard-fought quarters and their first overtime since 2019, the Orange and Blue fell short by one point, 63-62.

The second quarter started with the Bison going up by seven points until Holy Cross shots began to fall, including a half-court buzzer-beater shot to close out the first half.

In what should have been the final quarter of the game, the Bison trailed within the first couple of minutes. However, this soon changed as they went on a 7-0 run, with a three-pointer from Remi Sisselman ’25 and two layups from Emma Shaffer ’23. The Crusaders did not falter as the teams traded points. Towards the end of the quarter, both teams remained scoreless. The teams ended the fourth 56-56 forcing an overtime period.

Walls commented on her thoughts going into extra play. “Going into overtime my thoughts were to make sure defense and composure were an emphasis to myself and teammates. Both are very crucial in end of game situations,” Walls said.

Collins opened overtime with a quick jump shot in the paint that was answered by a three-pointer and two free throws from Holy Cross. In the final seconds of the period, Taylor O’Brien ’22 put two points on the board. Holy Cross did not falter and managed to get in one last jump shot. The Bison made numerous attempts to come back but were sadly unsuccessful. The game ended 63-62.

Despite the loss, many players put up impressive stats. The offense was led by Walls with 14 and O’Brien and Collins each with 10 points. Carly Krusl ’23 also had a team-high of nine rebounds to help lead the team defensively.

Walls said the team was able to grow from this experience. “It teaches us that every possession counts no matter the point of the game… this is what ultimately fuels and prepares us as we are reaching the back end of the season,” Walls said.