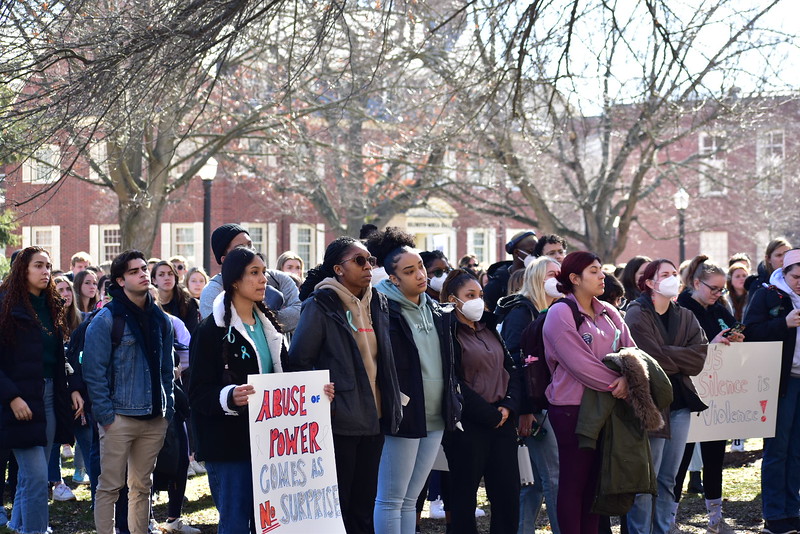 Disclaimer: To avoid any potential perceived conflict of interest, the Editorial Board of the Bucknellian had no role in the commission, composition, revision or layout of this article.

Roughly 300 University students walked out of class on Monday afternoon to protest the former chief of Public Safety Stephen Barilar’s alleged cover-up of a case of sexual violence.

Jillie Santos ’22, one of the speakers at the demonstration, said students were there to make themselves heard after allegations arose that Barilar assisted in the destruction of evidence in 2021. The case in question regards a female student reporting that a male student had sexually harassed her in a restroom using a cellphone.

Santos also referred to the lawsuit against the University by former public safety officer Colby M. Snook. In his suit, he said that he resigned from his position after facing retaliation from other employees for filing a report on Barilar’s alleged evidence destruction.

“These allegations are to multiple levels of institutional injustice, which make it impossible for students to feel safe on this campus, or feel like there would be accountability if something were to happen to them,” Santos stated.

During her speech, Santos voiced multiple other demands for the University’s administration and Public Safety from the collective student body.

She first demanded that a statement be given, addressing the allegations against Barilar by denouncing the alleged conduct and showing support for victims.

Next, she demanded that the University respond to a letter by the Coalition of Concerned Students, that was sent two years ago, in regards to the “mistreatment of the black community at Bucknell by public safety” by providing an action plan for change.

She also called for more collaboration and communication between Public Safety and the student body through a Public Safety Advisory Committee made up of student leaders. Santos said this committee will have oversight and control over policy and conduct at the department.

Finally, Santos demanded that students have access to body camera footage and internal recordings in cases of internal disciplinary action, in hopes of creating a greater sense of internal transparency.

The University issued the following statements after the rally:

“Bucknell University values and seeks to protect the free and open exchange of ideas on our campus. The safety and well-being of our students is also the University’s top priority and this will continue to be our ongoing focus.”

“The University is aware of what was said at today’s student event. As previously planned, new Chief Anthony Morgan will present his plans for Public Safety engagement with the campus community later this semester in a public event where all will be welcome to attend, ask questions and offer feedback.”

Jasmine Minhas ’22, Vice President of the Democratic Socialist Club and one of the organizers of the demonstration, said that she believes the University will not directly address the Barilar allegations because “[administrators] are more interested in protecting the institution than students.”

“I hope that the University starts to center our concerns and acts with that at the base of their operations rather than just kind of keeping things hush hush and like covering up corruption and perpetuating systems that perpetuate harm for students,” Minhas said.

Sage Lamade ’22 also spoke at the demonstration, encouraging students to fight for a campus community they deserve and asking Public Safety as well as the administration to “do their jobs,” with the power and authority granted to them, in order creating said community.

Many of the demonstrators expressed that since the Fran’s House incident last May—where former members of the banned fraternity Tau Kappa Epsilon (TKE) attempted to violently break into the University’s LGBTQ+ Affinity House—there has been a growing distrust between students and public safety.

Nabeel Jan ’23 shared that he lived across the street from Fran’s House when the event happened.

“It was sort of like shocking how little they were willing to do because it’s a pretty unified issue that if someone’s, like, breaking into a house, public safety should stop them from breaking into the house,” Jan said.

He also said that seeing the officers shake the students’ hands and reminisce about their college days was “sickening to see,” in reference to the allegations that public safety officers told the former fraternity members that they would escort them through the house once other students moved off campus after graduation.

Jan sees these latest allegations against public safety as a continuation of officers and administrators misusing their power, making him want to join the demonstration.

Out of the hundreds of students present at the demonstration, it seemed that there was a near-unanimous consensus that the student body wants the University to address the concerns brought about at the rally.

“We want to protect survivors and at the school, we want to honor them and hear their stories and we want this to be a safe place at Bucknell,” Carly Krsul ’23 said.

“If nobody says anything, then there’s an abuse of power that continues forever. I mean, [the accusations] had to have come from somewhere. I don’t know if I believe exactly what is being said, like the whole narrative, but at the end of the day [that student] did do those things, and they weren’t held accountable. And that’s a problem,” Eva Crisafulli ’24 said.

Crisafulli said she hopes that the University recognizes that something happened and takes the necessary actions to guarantee that it never happens again.

At the end of the rally, organizers of the protest handed out chalk to participants and Santos called for them to express their opinions and concerns by writing them on the walkways across campus.

As dozens of students took to walkways around the quad to write their concerns, Santos led the group in a final chant.