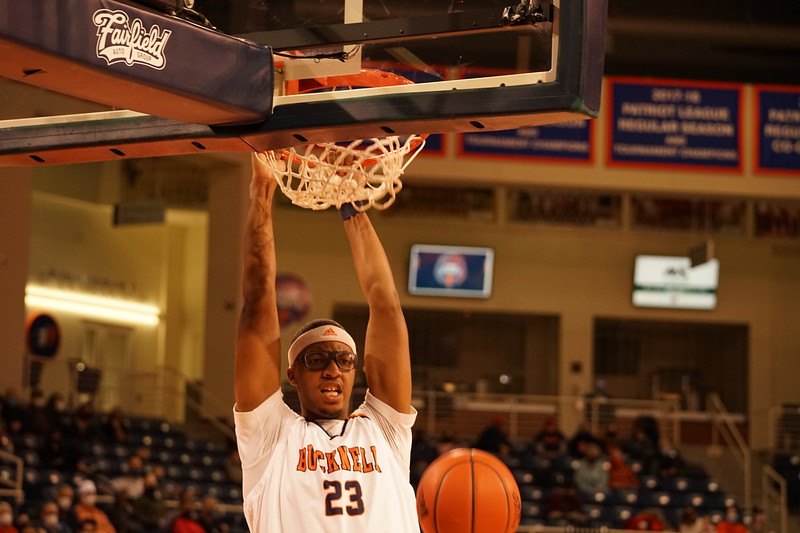 The shot clock read 5.9 seconds when Andrew Funk ’22 went for an off-balance 3-pointer. This basket sent the Bison to a tough 92-89 overtime win against Lafayette on Saturday at Sojka Pavilion. During the course of the game, Funk scored 20 points to help the Orange and Blue avenge an overtime loss against Lafayette that happened two weeks prior.

In the second half, Lafayette came back from a 17-point deficit and forced overtime with 10 seconds left in regulation. The Leopards sent a long three to secure extra time. By the first minute and 14 seconds of the extra session, the Leopards had a lead after sinking a 3-pointer to bring the score to 89-87. The Bison responded by scoring the final five points of the game to bring them to a triumphant win over Lafayette.

“It was a really hard fought game and we definitely showed improvement,” said junior Xander Rice. “I was really happy with how we kept playing hard and were able to get it done in overtime.”

Funk’s 20 points against Lafayette allowed him to pass Joe Willman ’13, Hal Danzig ’59, and Bryan Bailey ’02 on the University’s all-time scoring list. He has secured himself as the 27th all-time with 1,173 points putting him just one behind Gerald Purnell ’77 for 26th.

The Bison are back in action against the Black Knights on Wednesday at Sojka Pavilion.