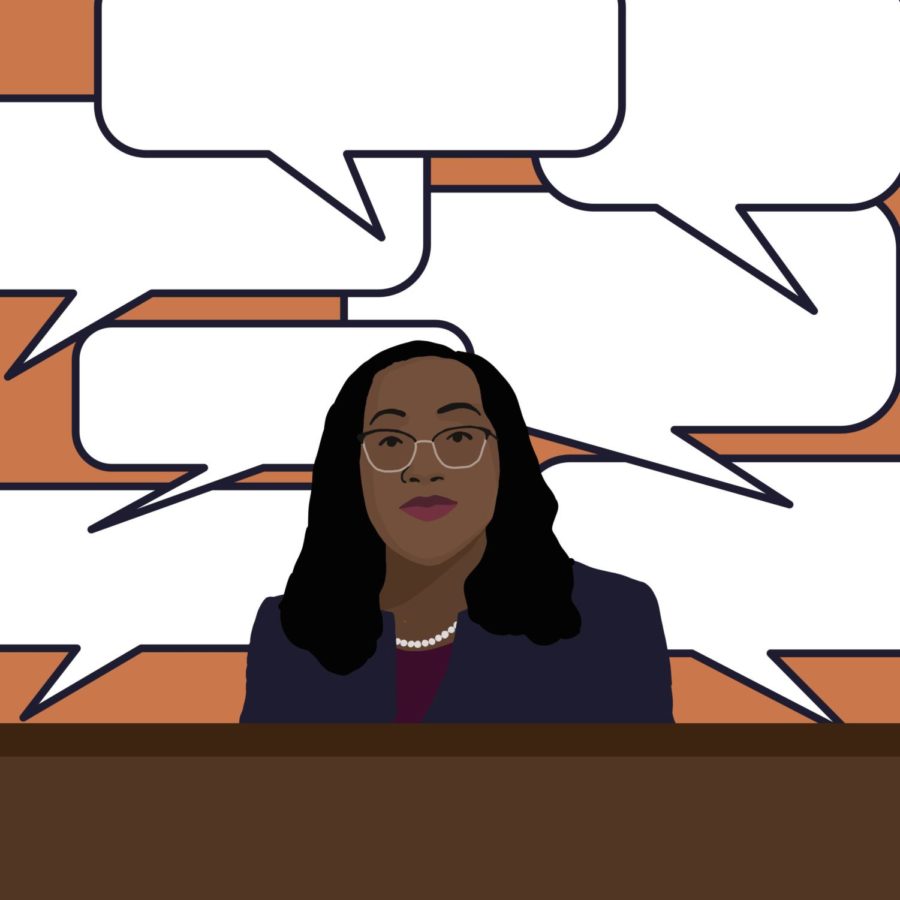 On the week of March 21, 2022, newly-minted SCOTUS nominee Ketanji Brown Jackson has entered the process of Senate confirmation, beginning with a hearing by the Senate Judiciary Committee.  Questions about her legitimacy have been raised constantly by the GOP as well as conservative media outlets, in an effort to delegitimize her nomination through claims of bias and affirmative action.  Throughout the first two days of her confirmation hearing, Judge Jackson has been subjected to seemingly relentless scrutiny by the GOP and the conservative media, spanning everything from her religious background and activity to her opinions on Critical Race Theory (CRT) and its presence in curriculum at Georgetown Day School, where Jackson is a member of the board of trustees.

Judge Brown Jackson has done a great job thus far of navigating even the most incriminating of questions and concerns posed to her, and has reaffirmed her obvious legitimacy for her nomination to the court.  A particularly interesting set of questions Jackson was asked to answer and comment on were related to her past rulings in cases of child pornography.  Her rulings were criticized as lenient, and her thoughts on how egregious the crime is were brought into question.  This was a completely legitimate set of questions for Jackson, drawing directly from her rulings and asked her about her approach related to the criminal sentences in these cases.  These questions can generally be referred to as “good”, or perhaps more professionally, admissible questions when it comes to determining whether a justice is fit to serve on the SCOTUS.

The conflict in the confirmation process for Judge Jackson occurs when the questions begin to devolve.  As opposed to the sensible questions and concerns posed to Judge Jackson about things such as her past rulings, her constitutional stances and confidence in her ability to execute on the Supreme Court, senators such as Ted Cruz, Lindsey Graham and Marsha Blackburn have begun to ask questions completely outside of the realm of judiciary qualifications.

Blackburn and Cruz, particularly, have engaged in what is now a days-long attempt at pinning Jackson to the “dangerous” progressive narrative held so closely by conservative lawmakers on the basis of few things other than the fact that she is a Black woman.  Cruz was the first to make the attempt, as he brought a copy of Ibram X. Kendi’s “Antiracist Baby”, to question Judge Jackson’s opinion on the introduction of CRT into curriculum at American schools.  Judge Jackson promptly dismissed this question and its lack of relevance to her confirmation for the court, citing that it is not her responsibility to institute political policy and agenda, but to determine whether it is legal and constitutional.  Senator Blackburn followed in Cruz’s footsteps, calling Judge Jackson’s presence on a board of trustees for a school that promotes progressive education, including the concept of “so-called white privilege” per Blackburn’s words, as, “deeply concerning”. In somehow even less relevant questioning, Blackburn doubled down, continuing on to ask Judge Jackson if she could define what a woman is for the court. Jackson once again dismissed the question.

Senator Lindsey Graham attempted to get “retribution” for the most recently confirmed SCOTUS justice, Amy Coney Barrett, by confronting Judge Jackson with a tirade of questions all pertaining to her religious affiliation and involvement.  Graham’s comments need no summary, but they do point to an important trend in SCOTUS confirmations.  Trying to contest nominees who appear to be political opposition is a fixture of the confirmation process on both the left and the right, but oftentimes these criticisms and questions are shallow and irrelevant.

Now, this is in no way to say that confirmation hearings do not have their merits.  It is absolutely necessary for a SCOTUS nominee to explain and defend their judicial abilities, tendencies and processes. However it is equally important that the questions and concerns raised by the Senate Judiciary Committee pertain strictly to said qualities. Trying to impose political leanings and views onto nominees based on thin evidence irrelevant to their judiciary history is unnecessary, and effectively a targeting tactic used by both sides of the political aisle to try to influence judges to take a political stance.

With this being said, politics and the SCOTUS are only as separate as the nominee makes them. Perhaps in most recent memory, Justice Barrett was particularly outspoken about how her religious affiliations and convictions were inherently connected to her constitutional interpretations.  In these scenarios, it is objectively admissible to question a Judge’s personal qualities and beliefs, because they have openly tied them to their judicial abilities. If Judge Jackson was outspoken about how her judicial rulings were inherently tied to or influenced by her connection to any social, political or religious organization, it should be expected that she receives the same treatment.

The reality, however, is that she has not been outspoken about any external influences to her judiciary abilities or decisions. Judge Jackson has worked her way through the legal education and judicial system more extensively than any other SCOTUS justice currently sitting on the bench, and her character and personal qualities have only come into light as an attempt to paint her as a political pawn.  Who is to blame for this?  Many people as well as systems; the diverse nature of the two-party political system, the visible favoritism in the selection of SCOTUS nominees in the past and quite frankly, Joe Biden himself. Biden was very outspoken about how he planned to nominate Black women only for this position on the bench, and while Judge Jackson’s status as a Black woman is certainly a necessary and long-overdue addition to the bench, that did not have to be a highlight of her nomination.

When confirmed, Judge Jackson will have been educated in and worked in the greatest number of judicial positions of any justice currently sitting on the Supreme Court. This alone is enough to earn Judge Jackson her nomination, regardless of her race, sex, age or any other superficial qualification.  By nature of being a Black woman, Judge Jackson was already going to face criticism and questions as to her qualification for her nomination, but by highlighting race and gender as key elements of her nomination, President Biden has only made those voices louder.  His vocal narrowing of the selection pool served no purpose to help Judge Jackson besides making himself look like the progressive Democrat the party has truly wanted, and it has in no way made Judge Jackson’s path to confirmation any easier. Judge Jackson deserves the absolute respect of the American people not only for her race or gender, but for her outstanding qualifications, and promise to be a champion of putting the United States in the position to progress as a nation.  This confirmation hearing has served as the perfect case study for how the process for determining those who will serve our nation’s highest court is flawed, and how our nation’s leaders cannot help themselves but point to the primal debate of left versus right.  The flaws are obvious in the process to all those watching and listening, major media has already begun to develop its own arguments, the system is in need of fixing, and there is no better time to do it than right now.