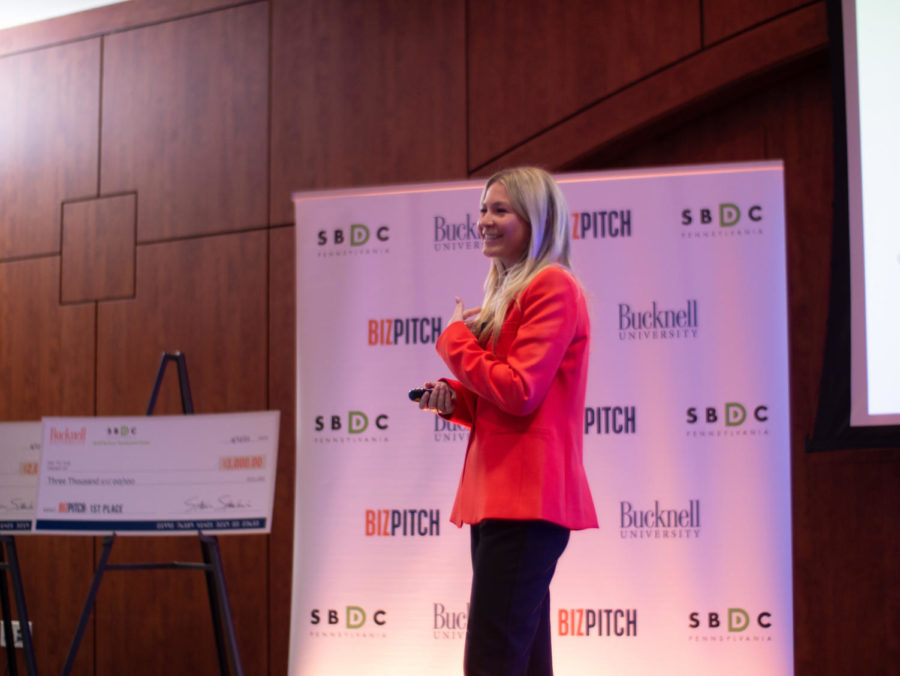 On April 12, five enterprising University students pitched ideas for new businesses to a panel of judges in a “Shark Tank”-style campus competition.

Held in the Terrace Room, the annual “BizPitch” event drew over 100 guests and attendees, both over Zoom and in-person. Steve Stumbris, Director of the University’s Small Business Development Center (SBDC), provided introductory remarks.

“That’s what we’re to talk about, and that’s what we’re here to celebrate tonight: the very youngest entrepreneurs that our [Small Business Development] Center has been serving,” Stumbris said.

After those introductions, the competition quickly got under way.

Students presented brief presentations for their startups, and then faced questions from the panel of judges. This year’s included Luis Davila ’03, the CEO of CTI Global, Winnie Okello ’10, a senior civil engineer with PennDOT and Dylan Lissette P’21, P’23, the CEO of Utz Brands.

Leading was Olivia DeNicola ’22, who presented Crunch, a platform to serve as a dating app between new-grad job applicants and future employers.

“If Crunch wins BizPitch,” DeNicola said, “we can take this idea to the next level: we use the money to get coding resources, to launch and develop the beta version of the app.” She fielded questions about possible competition from Handshake and LinkedIn, and clarified the platform’s potential to draw in employers through the current job market.

Cuong Nguyen ’23 followed by pitching AUGART, a platform for young artists to showcase and sell their 3D creations. Designed to implement geofencing similar to Pokémon Go, he distinguished it from competitors by its accessibility and “freemium” pricing plan.

Nguyen also discussed his plans to partner with universities and mentioned the possibility of integrating the platform with non-fungible tokens.

“AUGART is the future, and I’m asking you all to be a part of it,” Nguyen said.

Next, Alana Bortman ’22 discussed HopShop, a peer-to-peer platform to share and buy clothing. She focused on her idea’s unique features compared to Rent the Runway or other competitors: a lower cost entry level, more flexible liability policies, and integration services like laundering clothes to expedite exchanges for college students.

Bortman plans to initially target a few colleges, “There is a wide open market out there, and this is something that can really revolutionize fashion,” Bortman said.

Chemical engineering major Sam Sloan ’22 pitched Frost X Glass, an annual coating designed to ward off the layers of frost common to Northeast winters. Emphasizing a proprietary formula that she’s developing, Sloan shared her strategy of filing for a patent concurrently with beginning to manufacture the product.

Sloan leaned into her manufacturing experience, and made the case that the product could go into production as early as next year.

Maya Brown ’22 wrapped up the pitches with College Buddy, an app targeting college students to allow them to develop healthy, sustainable eating plans.

“Students even come to college expecting to gain the infamous ‘freshman 15.’ What if this is something that we can end?” Brown said. “Help me take the next step with College Buddy, so that college can be a transformative experience for the body and mind.”

The judges connected with Brown’s experiences, allowing her to distinguish her plan with an affordable “freemium” pricing model for students, as well as proposing brand partnerships with local retailers.

As the pitches were concluded, judges were ushered into a separate room. After a few minutes the results were announced.

Crunch won first place for the night, with DeNicola earning $3,000 in prize money.

College Buddy earned the “Changemaker” award, set aside for the idea that has the most potential to make meaningful change in the community and world, as well as third place, totaling $2,000 in prize money between the two awards.

Frost X Glass took home the “Fan Favorite” award — selected from the results of an online poll — as well as second place, raking in a combined $3,000.

“This ability to get up, pitch your ideas, it’s a life skill,” Meek said.

AUGART got the first “Innovation” award and HopShop won the second, netting $1,000 each.

In sum, all finalists won some money in turn for their efforts.

“BizPitch really taught me to enjoy public speaking and talking to an audience, along with sharing my ideas, but as well as asking crucial questions about the business that I want to develop,” Brown said.

DeNicola spoke similarly, emphasizing the impact of the coaching and development that the SBDC offers. “I would say it gave me a lot of skills that I’ll definitely use as I grow.” Thanking her mom and student collaborators for her success, DeNicola added, “Just knowing you can do something like [BizPitch], even if it doesn’t go as planned, it prepares you better for the next time you’re in front of a roomful of people and have to speak,” DeNicola explained, “which is definitely a life skill you need to have.”

If someone’s on the fence about participating next year, Brown adds, “I would say ‘Just Do It,’ like Nike. I wasn’t sure about doing this in the first place at all: I literally showed up in a sweatshirt to the preliminary round.” But, she said, all that is to say “I’m so proud to be here today,” Brown said.

“BizPitch is just different,” Bortman said. “You get to challenge yourself, put yourself out there, you get the guidance and space to grow and succeed. That can even turn into you making something real, changing people’s lives, whether that be in a large or small way.”

“It was a great opportunity, and something I’m proud and grateful to have been a part of,” Bortman said.