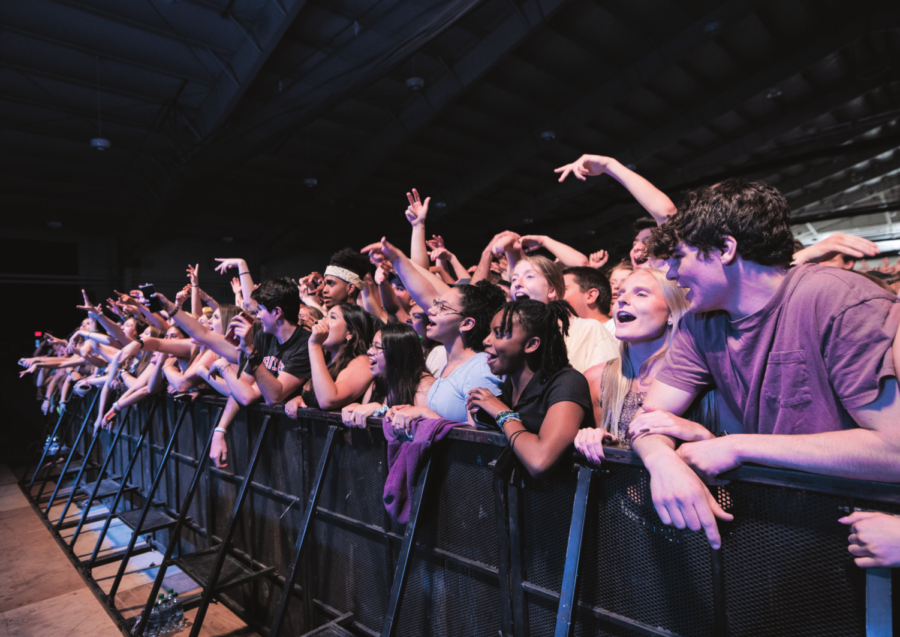 “[The] Concert Committee was thrilled with the turnout at Jack Harlow last Friday,” Austin Bednarz ’22, chairperson of the concert committee, said. “Having such a highly renowned, well-liked artist come to campus was a perfect capstone to the end of the semester! His engagement with the crowd and acapella verses added to the hype and high energy of this one of a kind experience.”

While many had fun at the show, some were upset that the rapper showed up nearly an hour late—only to perform a brief 45-minute set.

“It was really annoying to wait because I would have just showed up later if they scheduled it later,” Kaiya Burton ’23, an animal behavior major, said. “They played music for like 30 min before the opening act but then there was about 30 min before Jack came out where it was quiet, everyone was just talking to their friends.”

Even while Harlow performed, a few students reported that tall attendees in the front obscured the show, making it difficult to enjoy.

“Unfortunately there was little to see since the football and volleyball team were all in the front,” Annie Glenning ’24, a 5-foot-7 inch-tall mathematics and classics dual major, said. She also said that some students were shoving and pushing during the performance.

Brenna Paxton ’25, a psychology major, experienced a similar issue. At 5-foot-2-inches, she saw even less than Glenning.

“I feel that it would’ve been a bit better if we could see past the tall-wall that stood before us, the volleyball and football teams,” she said.

Despite all of these issues, students still enjoyed the show.

“The Jack Harlow concert was definitely a night to remember,” continued Paxton. “Overall, I would say his performance was pretty good, and students were satisfied.”

Glenning and Burton both agreed, saying that once the minor inconveniences were overlooked, they had a lot of fun with their friends seeing Harlow perform.

Harlow’s next performance is set to be this Friday at Penn State University to headline their annual “Movin’ On” music festival. If any University students want to see him again, Penn State is a brief hour’s drive. The PSU Student Affairs website has more information.