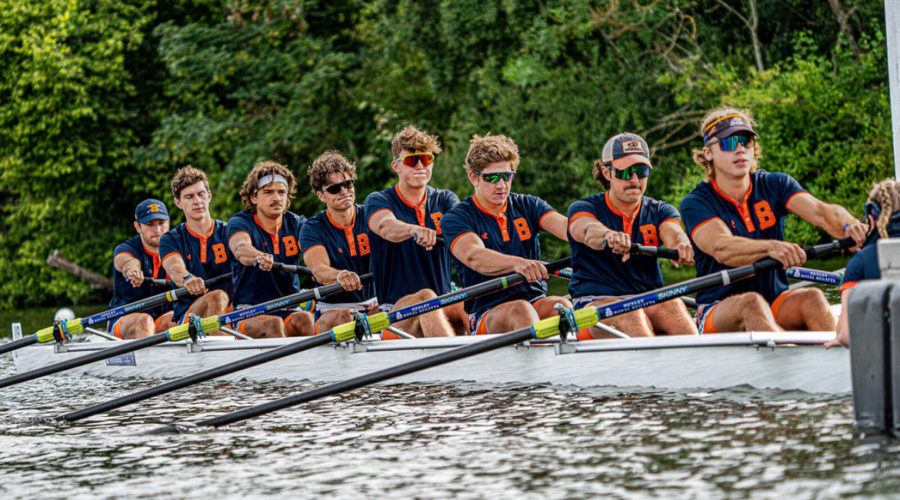 In July, Bucknell Club-Varsity Crew ended a phenomenal 2022 season with a trip across the pond to the Henley Royal Regatta.

Before competing in the most historical and prestigious regatta for Men’s Crew, the team who won the Mid-Atlantic Rowing Conference (MARC) Championships, had two boats win medals at the American Collegiate Rowing Association (ACRA) National Championship Regatta (including a gold in the 3rd Varsity 8). The team is led by Coach Dan Wolleben and Assistant Coach Henry Leonardi.

The Men’s Crew program has a longstanding history on Bucknell’s campus. While it was formalized as a school sport in the 1980s, the crew’s history dates back to 1873 when the first crew club was founded by David Jane Hill, who later became President of the University.

In 2002, the men’s crew was reclassified as a club-varsity program in response to Bucknell’s commitment to achieving gender equality in athletics through Title IX. However, the designation has never inhibited the success or competitiveness of the program, which is reflected in the monumental achievements of their past season.

At the MARC Championship, the 1V8, 2V8, and 4+ swept the competition to claim the championship conference title. In a blog post written by Coach Leonardi, he details the V4+ was tasked to compete in the first grand final of the day, but was “unfazed by the pressure,” and they “established a commanding lead at the halfway point which it extended to open water by the finish line.” Similarly, the 2V8 held a substantial lead throughout the race and ultimately finished nearly 30 seconds ahead of their nearest competitor. The 1V8 had an incredible performance with neither boat—Bucknell or Lehigh—giving “an inch on the opposing crew for the first 1750m,” and a captivating video review confirming Bucknell’s victory by 0.3 seconds.

While the MARC was an impressive showing, the ACRA Championship is where Bucknell Men’s Crew can truly test their training. In the grand final, the 2V8 was tight with Michigan and George Washington, but Bucknell crossed the finish line for bronze “to cement itself as one of the strongest 2v’s the program has ever produced,” as described by Coach Leonardi. The 3V8 had a program-history-making performance by seizing the opportunity “to drop the hammer” and be the first ever Bucknell 8+ to win the gold at the ACRA National Championships. The team placed 6th overall.

“This result is really a testament to the work that the coaches and rowers have put into the program to make it as fast as possible,” Zach Gerhardt’24, the team’s junior class representative, said. “We knew coming into the weekend that we would be a competitive crew, but seeing two of our 5 boats come across the line in a medaling position was so electrifying.”

To end their season, the Men’s Crew traveled internationally to compete at the Henley Royal Regatta. The event is undoubtedly the best-known regatta in the world that hosts over 700 crews annually on the Thames River in England. Gerhardt describes the Henley as being like the Superbowl for a rower as “you watch the livestream and watch replays of tight races just in awe of the absolute pinnacle of the sport.”

“Being at the Henley Royal Regatta was a surreal experience,” Luca Arvanitis 25’, the team’s sophomore class representative, said. “As a competitor, you race down the course while tens of thousands of people from all over the world and Europe watch you race down while wearing suits and lavish dresses.”

The participation and incredible ranking earned by the Bucknell Men’s Crew team reflects the dedication and commitment throughout the entirety of their season.

Editor’s note: this article has  been revised from its original version