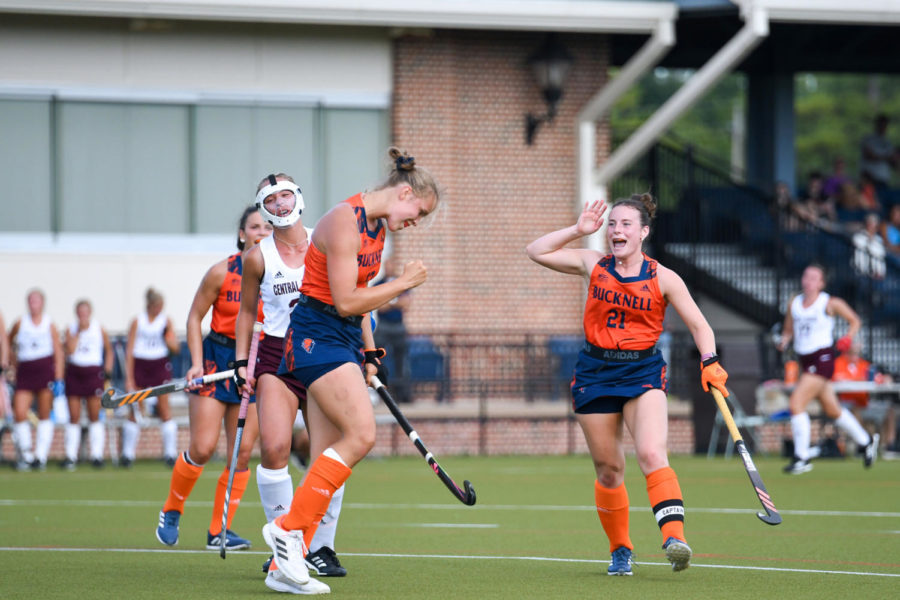 The Bison dominated from the opening whistle against the Central Michigan Chippewas, with six different Bison tallying points during the game. The Orange and Blue got on the board just over five and a half minutes into the first quarter, with Lily Neilson ’25 converting on a shot from the left wing. The Bison continued to press, securing another goal in the second quarter, this time from Kira Leclercq ’26 who found the back of the net for the first time in her career. The Bison entered half time leading 2-0, and continued to fight for the remainder of the match. While the Chippewas were able to get on the board four minutes into the third quarter, the Orange and Blue responded just three minutes later on a Rachel Apa ’24 goal. Nielson added one final goal for the Bison towards the end of the third quarter, resulting in a Bison victory, 4-1.

The Orange and Blue returned to Graham Field on Sunday to face-off against the Temple University Owls. Both teams put up a fight in the first half, with a combined two shots and three penalty corners. While the Bison carried the momentum, the Owls were able to capitalize on one of their chances, leading the Bison 1-0 at the half. Early in the third quarter, the Orange and Blue defense was met by an eager Temple offense, which found the back of the net three times at the beginning of the third quarter. The Bison responded in the fourth, with a goal from Nielson, lessening the Owls’ lead 4-1. Temple was able to convert one final goal in the fourth quarter, making it extremely difficult for the Bison to come back. With less than a minute left in the match, Neilson scored off of a penalty corner, ending the match 5-2 in favor of Temple.

Despite winning their first game, Apa admitted, “the team had a tough first couple of games, but knows what needs to change in order to get ahead with an upcoming Patriot League game!”

The Bison will travel to New England this upcoming weekend, facing Patriot-League opponent Holy Cross on Saturday, Sept. 17 at 11 a.m. They will then make their way to Providence on Sunday, Sept. 18 to play Providence College at 1 p.m.