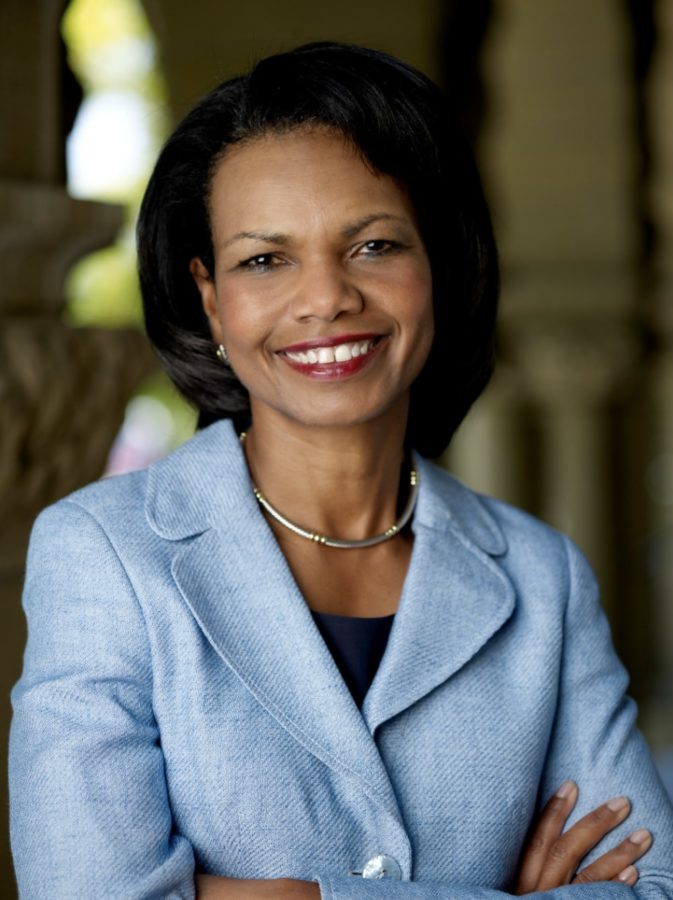 Dr. Condoleezza Rice said to Bucknell students that tensions with Russia are at equal levels to what they were during the Cuban Missile Crisis.

The former Secretary of State appeared virtually on campus in the Weis Center for the Bucknell Forum Speaker Series with University President John Bravman on Tuesday.

The Series was halted during the pandemic but is back in motion for the 2022-23 academic year. Rice, the first Black woman to serve as Secretary of State and the first woman to serve as National Security Adviser under President George W. Bush, is a graduate of Stanford University in Palo Alto, Calif.

She begins the list of speakers that are to speak on the theme “The State of American Democracy” in the coming months.

President Bravman, a longtime friend and colleague of Dr. Rice from their time together at Stanford University, asked about 15 questions — ranging from her opinion on the state of the war in Ukraine, social media, the electoral college system, expectations of the U.S. education system and the polarization of the country as well as the Supreme Court.

Rice served as the Secretary of State from 2005 to 2009. Prior to that, she served as former President George H.W. Bush’s National Security Council as its senior director from 1989 to 1991.

Rice currently works as Tad and Dianne Taube Director of the Hoover Institution and is the Denning Professor in Global Business and the Economy at the Stanford Graduate School of Business.

The Bucknell Forum speaker series was started in 2007, featuring a number of high-profile guests in its history, including primatologist Jane Goodall, documentarian Ken Burns and CNN broadcast journalist Anderson Cooper.

“The Bucknell Forum underscores the University’s long-held commitment to welcoming many voices and ideas,” Bravman said in an August press release. “This speaker series was founded in 2007 with the purpose of encouraging thoughtful conversation featuring different perspectives on some of the most pressing issues facing society. That will certainly be the case during this midterm election year.”

Each of the guests are scheduled to appear at 7:30 p.m. and the event is free for the public. Tickets are required, and can be acquired two days before the event through the Campus Box Office website. An ASL interpreter is scheduled to sign at the event.

President Bravman also posed queries on the topic of nuclear weapons, foreign relations and her opinion of further possible U.S. involvement in the war on Ukraine after Russia invaded Ukraine in February this year.

Rice said that she felt Soviet Russia and the U.S. had reached a balance during the Cold War, where they both understood that mutual destruction was not going to benefit either side, even if one struck first.

She said that the nation’s current relations with Russia have dwindled to what they were when the Cuban missile crisis happened, but she does not believe Putin will “cross that line,” citing NATO as a buffer against a war where the U.S. would be directly involved against Russia.

Chemical weapons are something Rice said she believes Putin would use, if he hasn’t already deployed them, because of Putin’s anger about his relative underperformance compared to his expectations for the “military operation” in Ukraine.

Bravman and Rice also had a short back and forth in which they asked and answered things about the electoral college, with Rice answering that she felt it was better than any alternative someone had brought up.

She said it emphasizes the importance of including minority voices, smaller states and rural voices. Despite its imperfections, she said she did not want to see presidential candidates skimping out on visiting certain states and cities to campaign, which would be a likely result of the “one man, one vote” system.

Polarization of a nation

President Bravman first asked Dr. Rice about her opinion on the nation’s highly polarized environment and whether the tense feelings of the United States’ political scene were relatively new or a long-standing issue.

Rice said that she believed that American democracy has lost sight of what the vast majority of Americans want, referencing increased levels of “tribalism” on social media.

The fact that the American dream has become a stretch for many families and that the average American may not consider American institutions to be for them anymore based on a slew of reasons also came up in her response.

“Tribalism” is a phenomenon where people often band together with like-minded speakers and thinkers, especially politically.

“Seeds of trouble in democracy are always there, but it’s accelerated in recent years,” Rice said.

She said democracy is a concept that will always have its troubles, and that she felt sometimes people can take it for granted. Rice spoke on the importance of being mindful that politicians nowadays feel incentive to respond to the extremes rather than the middle ground, where most Americans fall.

She also said that public service and working and being involved with the government is what will get America through this time of extreme polarization and that social media could instigate it.

“I’m glad social media was not as much of a factor when I was Secretary of State,” Rice said.

She said social media does have value and that she does use it herself, but that its unintended consequences have had effects on democracy.

The role of National Security Adviser, Rice said, has shifted considerably since her time in office with regard to social media, especially regarding cybersecurity. The role has since expanded to accumulate cybersecurity concerns especially after the attacks of September 11, 2001.