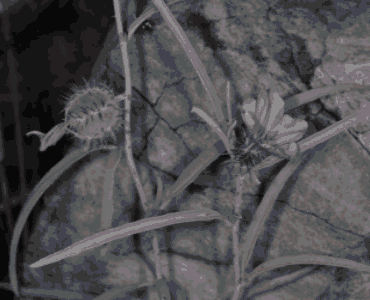 Martine characterized this plant as being “cryptically dioecious,” which is an infrequent characteristic among plants. At first sight, the plants appear to produce both male and female sex organs. Upon further research, Martine noticed that females produce a type of pseudopollen. The pollen is not fully operational, which distinguishes male and female plants. This cryptically dioecious category comprises  less than one percent of the flowering population.

The plant’s survival is also dependent on fires in the region. It is a poor competitor when there is no fire, but afterwards the plant is able to thrive in the sand-like environmental soil.

Martine was unable to fully describe and identify the tomato bush species when he first noticed it in 2009 because no fruits or flowers were on the plant, which are important identification markers in the taxonomy process. During his most recent trip to Australia, his team was able to successfully find samples of the plant with flowers on it, gathering enough data to write a pithy paper on the species.

He also stumbled upon a new species of moths that were eating the plant, but handed the moths to another biologist who was more qualified to research them.

These new discoveries have intrigued Martine and kept him interested in Australia and his research. They have also given him a new perspective on his research that he hopes to pass on to both the students working with him and the general population.

“The idea that there are still possibly thousands of different kinds of plants, insects, and animal species in just this region alone yet to be discovered is fascinating … We think of the planet as being well-known, but there is probably more we do not know than what we do know,” Martine said.

Ingrid Jordon-Thaden, a new Post Doctoral Fellow in the biology department at the University, will soon be working with Martine on several follow-up projects to further investigate the bush tomato plant.

“We are generating sequence data to understand the phylogenetic relationship between the Solanum species and its relatives. We will also be conducting experiments to understand the pollination biology of the species,” Jordon- Thaden said.