Women’s basketball falls to Boston U, rebounds against Lehigh 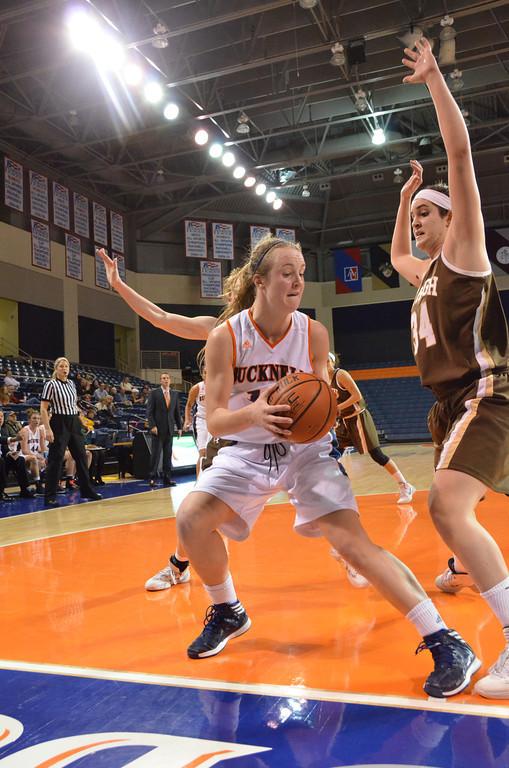 The women’s basketball team fell short 86-58 at Boston University in its first game against the Patriot League newcomer on Jan. 25. They were able to rebound with an 82-68 victory at Sojka Pavilion against Lehigh on Jan. 29.

The Boston Terriers jumped out to an early 13-2 lead in the first four minutes before Megan McGurk’s ’17 layup ended the scoring drought. A pair of free throws by Shelby Romine ’14 brought the Bison within six with 5:17 remaining in the half, but Boston University ran away with the lead after that. The Bison entered halftime down 38-26.

“Our team plans to refocus in the two days of practice we have ahead of us first off by correcting our defensive mistakes. By intensifying our defensive pressure and having a bigger presence on the boards, we hope to get easier baskets in transition or into a better flow on offense,” McGurk said.

The Bison came out firing after the break with four 3-pointers to start the second half, three of which came off the hand of Romine. Romine led the Bison with 22 points while shooting 5-9 from long range. She added six rebounds and three assists to her statline.

Still, the Terriers’ offense was unstoppable all night, as they shot over 50 percent from the field and from 3-point range, leading to 48 second half points. Turnovers kept the ball in Boston’s hands all night. The Orange and Blue defense was not as formidable as it had been in recent games, and the Bison hope this game is just an outlier on their schedule.

Boston scored 18 of the final 19 points to put the game out of reach and secure the victory. Audrey Dotson ’15 added 17 points while the entire team managed to shoot 53.8 percent on 3-pointers.

“The Boston game was definitely a tough loss, but our team learns well from mistakes; we bounce back quickly,” Sune Swart ’17 said.

The Orange and Blue were able to regroup against Lehigh later in the week. The Bison started off the game strong with a 10-0 run and never trailed. After some back-and-forth play, the Bison led by 12, entering halftime with a 36-24 lead.

“The moment the Boston game ended we began preparing for Lehigh. The Patriot League boasts great competition, and focused preparation along with positive energy is critical for success,” Swart said.

Lehigh began to climb back into the game in the second half, but Claire DeBoer ’17 and Romine propelled the Bison forward. DeBoer finished the game with 17 points and nine rebounds while Romine had a game-high 28 points.

The Bison pulled away in the final minutes, never letting up on the pressure. The Bison shot 44.8 percent overall and 50 percent on 3-pointers. The Bison also grabbed 40 total rebounds, 11 of which were off the offensive glass.

The Orange and Blue (11-8 overall, 6-3 PL) surpassed their conference win total from a year ago with the Lehigh victory. They face Colgate for the second time this season at Sojka Pavilion tomorrow at 7 p.m.