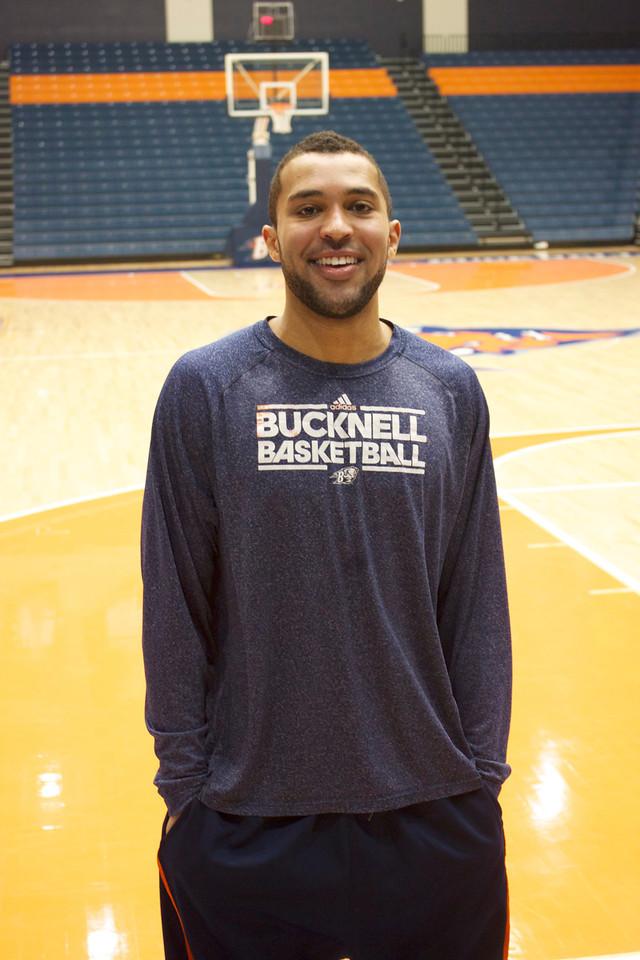 Although Cameron Ayers ’14 has played a pivotal role in the men’s basketball team’s success for the past three years, the 6-foot-5-inch guard’s leadership thus far into his senior campaign has excelled beyond all expectations. On Feb. 1, Ayers captured 21 points, the most of the team, and helped secure a 79-68 win at Colgate, pushing the Bison record to 5-5 in Patriot League and 10-11 overall.

The victory was essential, as the Orange and Blue moved one game closer to No. 4 Holy Cross and gained motivation for upcoming matches.

“We played well defensively and took the shots we wanted to take on offense. We played in a good flow on offense and my teammates were able to find me and put me into position to score. It was definitely a team effort,” Ayers said.

Ayers’ humble nature does not account for his own personal success on the court. The senior now has 1,383 career points, ranking him one under Bryson Johnson ’13 for 10th place on the Bison’s all-time list. Over the course of his career in Lewisburg, Ayers has made an impact across the entire Patriot League, earning spots on the All-Rookie team, Second Team All-Patriot League and First Team All-Patriot League team in preceding years. He played a crucial role in the 2012-2013 team’s success, acting as both a point and shooting guard for the team that gained a NCAA bid after winning the Patriot League Championship. Ranked 12th in the Patriot League for scoring and 10th in field goal percentage, Ayers’ junior season created a name for himself among players like Mike Muscala ’13 and Johnson.

With the loss of these key players at graduation, Ayers has filled a leadership spot in his senior year that is widely noticed by players, coaches, and fans alike.

“My leadership role has changed a lot. I try to lead by example and lead a lot more vocally. I have to be extremely focused every day and energized,” Ayers said.

Whether in the locker room, at practice, in the classroom, or on the court amiss a close game, Ayers represents the University, his teammates, and himself with poise and confidence. More than halfway through his last season as a Bison, Ayers has set many goals for the team. He aims to follow in the footsteps of last year’s team by winning the Patriot League and the Patriot League Championship, then getting to the NCAA tournament. Although some may be skeptical of Cameron’s aims, the team is inspired by his determined attitude, and the Bison will continue to follow his leadership for the duration of the season.

MVP of the Lewisburg Subregional of the TicketCity Legends Classic