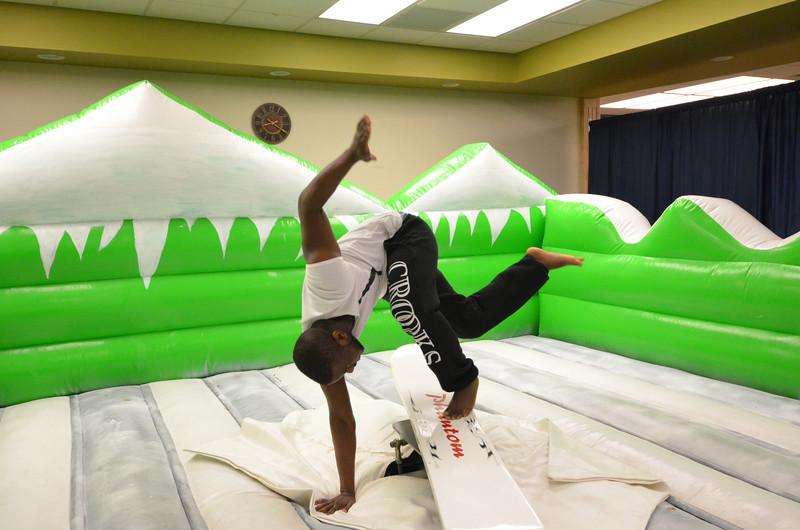 Though the 2014 Winter Olympics are currently taking place thousands of miles away in Sochi, Russia, on Feb. 7 Activities & Campus Events (ACE), Gender & Sexuality Alliance (GSA), and the men’s baseball team brought the Olympics to campus. Together, these organizations sponsored an event which featured a live broadcast of the Olympic Opening Ceremonies held in the Elaine Langone Center Hearth Space.

In addition to  comfortable seating and a large TV screening the ceremonies, students who attended could also play games to test their knowledge of the Olympics. The baseball team sponsored an air hockey tournament, and other students tested their balance on a mechanical snowboard and a snowboarding video game. Students could also eat a “breakfast of champions” that included fruit, chocolate chip and regular pancakes, bacon, and a variety of delectable pastries.

GSA had a strong presence at the event, in an effort to bring to light the difficult issues Olympic athletes have dealt with over the past few months.

“[They] had a table showcasing gay Olympians and [displaying] the news coming out of Russia,” ACE Executive Chair Liz Baldwin ’16 said.

The event was popular among students, with more than 200 people in attendance. The Olympics will continue to play on NBC and online until Feb. 23.

ACE’s next event is the Valentine’s Day Soiree tonight at 7:30 p.m. in the Terrace Room. The event will include food, speed dating with members of Chi Phi fraternity, and the opportunity to stuff your own Pillow Pet.