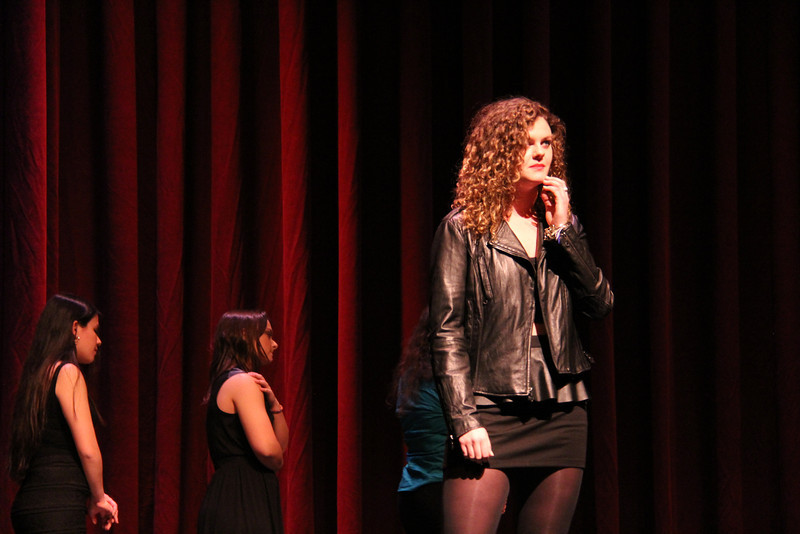 It’s February once more, and in addition to Valentine’s Day and the seemingly endless snow, this month brings with it a new rendition of the Vagina Monologues. An annual tradition at the University, this risqué, hilarious, and thought-provoking performance took place on Feb. 8 at 8 p.m. and Feb. 9 at 2 p.m., both in the Harvey Powers Theatre.

“This experience is transformative for both the performers and the audience,” Meghan Balot ’16 said.

The Vagina Monologues is an episodic play written by Eve Ensler and includes stories ranging in subjects from pubic hair to childbirth. Additional topics that were addressed included the relationship between the vagina and femininity, different types of moaning, and finding that elusive clitoris. Darker themes were also explored, such as female oppression, the trauma of sexual assault, and the troubling prevalence of involuntary female circumcision. One of the goals of the production is to help raise awareness about these issues.

“I monologue because even on this campus, if I walk past a male at night, blinding and terrifying fear overtakes my body,” Kate Albertini ’14 said. “I know I am not the only one who feels this fear. I monologue so one day we won’t feel this fear.”

The performance began with students discussing the various slang terms used for the vagina, then continued on to tell the story of a woman whose marriage problems allegedly stemmed from her refusal to shave her pubic hair. When her husband has an affair and blames it on her unwillingness to shave, she acquiesces but eventually discovers that she cannot be with someone who does not respect her choices.

After a light-hearted piece describing what sentient vaginas would say and wear, Morgan Turner ’14 put on a tremendous show as an elderly woman who described her uncomfortable feelings about her “down there.” The next monologue depicted a woman truly “discovering” her vagina for the first time, and her transformation from confusion and fear to wonder and understanding.

The following performances took on a more serious note as they described hardships women are subjected to even today. Various performers proclaimed how they were “over” the mistreatment, violence, objectification, and inequality directed toward women. Somber and passionate performances left the audience speechless.

“Although the global movement to end violence against girls and women has grown a lot in the past few years and continues to grow, the United Nations statistic still remains true that one in three women will be beaten or raped in her lifetime,” director Anna Astakhishvili ’15 said. “I think knowledge is power. This is what the play tries to do–educate people around the world.”

The mood lightened considerably as Caplin took the stage and rejoiced in the use of the “c-word,” encouraging the audience to abandon the negative stigma associated with the word and embrace it instead. Caplin ran up and down the aisles shouting the word, convincing a fair portion of the audience to join in with her.

The show reached its climax (no pun intended) with the performance of Ana Aguilera Silva ’14 as the “Moaner.” Silva teasingly stripped off clothing throughout the performance, eventually leaving nothing on except for suggestive lingerie, including a cat tail. She also produced the most laughs with her many renditions of different moans, including variations such as the “college moan” (ooooh-shhhhshshsh!).

The show ended with one woman describing viewing childbirth, and another elaborating on how she hopes that they can gather a billion followers to stand up for women’s rights. As a final treat to the audience, the entire cast came on stage and danced to “Talk Dirty” following curtain call.

The theme of this year’s performance was “One Billion Rising,” which represents the number of women that are abused or assaulted in their lifetime. Producer of the Monologues and President of V-Day Bucknell Lindsay Allardyce ’14 hopes that V-Day can inspire a billion people to stand up and demand justice for women, whether by denouncing misogyny, creating videos and blogs, writing to their representatives, or however else they feel they can contribute.

“V-Day and The Vagina Monologues became my safe haven after being assaulted my freshman year. The women in V-Day were the first people I ever told, and they supported me unconditionally and helped me to gain confidence and love myself,” Allardyce said. “It has been an amazing part of my four years here and I will be sad to leave it behind. The Monologues are hilarious, touching, relatable, informative and generally awesome! I hope that The Vagina Monologues will continue to inspire others the way it has so deeply inspired me.”