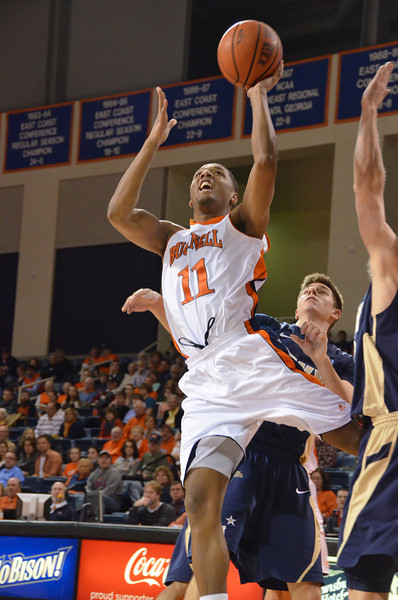 The Bison lost at Holy Cross 65-50 in another nationally televised game on Feb. 8 before trouncing the Naval Academy 78-57 at home on Feb. 12. The win against Navy stops the Bison’s latest two-game losing streak. The Orange and Blue improve to 11-13 on the year and 6-7 in the Patriot League.

The Bison and the Crusaders were engaged in a tough first half contest. There were six lead changes and three ties in the first 12 minutes. Neither team led by more than four points for the first 16 minutes until a Holy Cross field goal put the Crusaders up 20-14. The Orange and Blue faltered in the final minutes of the first half as Holy Cross extended their lead 27-21.

Holy Cross went on a 26-12 run to start the second period, and the Bison never could recover from the terrible second half start. Cameron Ayers ’14 and Chris Hass ’16 combined for 29 of the Bison’s 50 points.

Determined to get a must needed win, the Orange and Blue returned to Sojka Pavilion to face the United States Naval Academy. It was a complete team effort as the Bison prevailed in dominating fashion.

“This was a huge win for us,” Ayers said. “I thought it was a total team effort that started with our defensive energy. When we can get stops and play well offensively, we are an extremely tough team to beat.”

The starting time of the game was pushed up to 6 p.m. due to the impending storm headed up the East Coast, but that didn’t affect the Orange and Blue’s energy.

Steven Kaspar ’15 and Dom Hoffman ’16 returned to the starting lineup. Their energy helped spark an early 17-9 lead off the strength of a 9-0 first half run.

“The team performance was tremendous and it really showed tonight that all 14 of us are going to have to get this job done,” Ayers said. “Positivity and continuing to work hard everyday has been an emphasis for us because of the adversity we have been facing as of late. We just have to continue to take it one day at a time and continue to improve as a unit.”

The Bison continued their dominance and finished the first half with 44-21 lead. Kaspar had eight assists and seven rebounds while Hoffman netted 14 points. The second half was more of the same. The Bison shot 41.9 percent from the field and easily maintained their lead until the end. Hass lead the Bison with 15 points on 6-11 shooting while Kaspar dished out 10 assists.

Looking to make the final push towards the Patriot League Tournament, the Orange and Blue will face the United States Military Academy at home tomorrow at 7 p.m.

“We have to keep building everyday. We know what it feels like to win again and we are gaining our confidence back. We just have to stick with the journey and make one final push at this thing,” Ayers said.