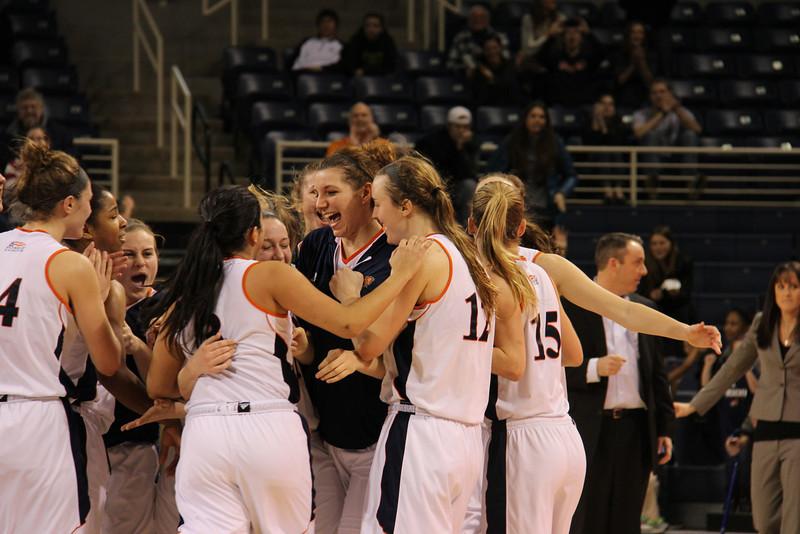 Down by as much as 14 points in the second half to Holy Cross, the Bison stormed back for the 82-79 victory at Sojka Pavilion on Feb. 8. The Bison were then stopped on Feb. 12 against Navy 70-61.

The Orange and Blue defeated Holy Cross for the second time this season, completing the season sweep for the first time since 2007. The Bison fell behind early, 17-9, until a layup by Megan McGurk ’17 and two baskets from Claire DeBoer ’17 brought them back within two.

The high scoring first half saw eight lead changes, and the Crusaders led 44-40 at halftime. The Orange and Blue managed to shoot 53.3 percent from the field but only 54.5 percent from the free-throw line as they entered the locker room.

The difference through the first half “was our efforts on the defensive boards after getting stops and converting those to points on offense,” Sheaira Jones ’16 said.

Holy Cross got off to another hot start to begin the second half, and the Crusaders led 63-49 by the 10-minute mark. Shelby Romine ’14 then started the comeback with a pair of free throws. Romine recorded a remarkable 17 points in the final 10 minutes , giving her 19 on the night to go along with 11 rebounds and 6 assists.

The Bison went on a 21-5 run and regained the lead at 69-68 with 5:41 remaining in the half. The Crusaders pulled within one off a three-pointer with 21 seconds left, but a pair of Romine free throws sealed the deal and the victory.

“I think as a whole we were more aggressive in the final 10 minutes–attacking the basket more and looking for our outside shots. This opened things up for our posts, too, which allowed us to get enough momentum going to make a comeback,” Romine said.

Audrey Dotson ’15 had a career-high seven blocks in 38 minutes, and Jones came off the bench to contribute nine points on 4-7 shooting.

The Bison hit the road on Feb. 12 against Patriot League-leading Navy. Their previous matchup against Navy ended in a 94-92 nail-biting defeat in double overtime, and the Orange and Blue were looking for redemption.

The Bison jumped out to an 11-2 lead through the first four minutes. The hot start for the Orange and Blue slowed through the first half, but they were able to keep the game close as they trailed 27-25 at halftime. Navy came out firing in the second half, and they were up by 14 as they scored 14 of the first 16 points. The Bison were able to climb back into the game like they always have, and McGurk’s three-pointer brought them within five with 5:28 remaining. A pair of McGurk free throws brought the Orange and Blue within one point, but Navy scored the final eight points of the game to earn the victory. Romine and McGurk led all Bison with 14 points each while Dotson added five assists and secured five rebounds.

The Bison (13-10, 8-5 PL) now sit in fourth place in the conference and have five games remaining in the regular season. Their next game is tomorrow at 1 p.m. against Army at West Point, N.Y.