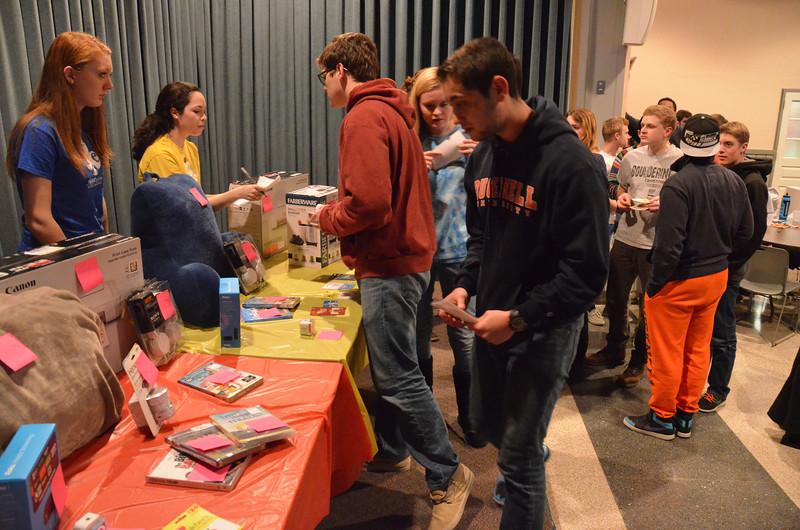 Twenty-eight teams battled for various prizes, bragging rights, and an opportunity to put their team on the scoreboard at ACE’s ThinkFast game show trivia event on Feb. 22.

The event was held in Larison Dining Hall and ran from 9-11 p.m. The game show, which was put on by TjohnE Productions, challenged teams with trivia questions like naming songs by ear, identifying Supreme Court judges, and choosing the number of syllables in the word supercalifragilisticexpialidocious.

Unlike the majority of other game shows, ThinkFast challenged participants to exercise more than just their brainpower. Participants were given individual, 30-second tasks and competed against two or three other contestants, ultimately leaving it up to the crowd to vote for the winner. During the 30 seconds, participants were given tasks that consisted of debating whether a man or woman would make a better president, giving a compelling argument for getting out of a speeding ticket, and performing a four-person dance-off that impressed even the best dancers out there.

In addition to providing this high-energy event that encouraged students to be quick on their feet (literally), ThinkFast received rave reviews from participants.

“ThinkFast was the most fun I’ve had all year. Props to ACE for planning the event–it was awesome,” Nick Palmer ’17 said.

“An interactive game show is something I’ve never done before. I especially enjoyed the great food and prizes,” Leylin Marroquin ’14 said.

ThinkFast was a big hit among those who participated and provided a great opportunity for friendly student competition.