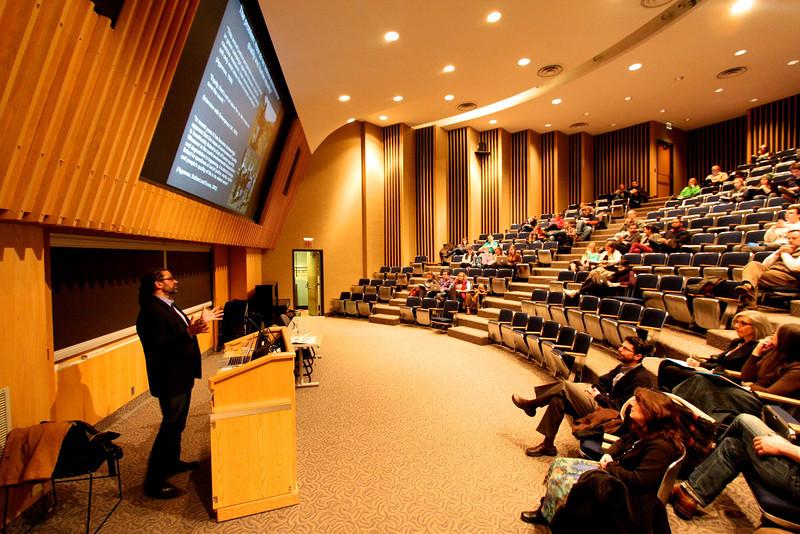 Agyeman explained why he placed “E/quality” in such a particular format on the first slide of his presentation. He attributed this format to the idea that quality of the environment and the equality of human beings should be the same goal.

“Sustainability should be about what is possible; we must balance environmental quality and human quality,” Agyeman said.

Agyeman used the streets of Boston versus the streets in Gothenburg, Sweden as an example. He stated they are both the same width but Boston’s roads are 80 percent for car travel and only 20 percent for pedestrians while Gothenburg’s roads consist of only 10-15 percent for car travel, making it more welcoming for people in Gothenburg. He said such differences enable interactions and awareness within the community. This integrates social justice and the environment, one of the many reasons why Sweden is both the winner in causing less pollution and promoting human interactions.

In another example, Agyeman explained that competitive consumption heightens inequality. For example, the rich aren’t rich enough, so they strive to become more wealthy. Inequality increases our carbon footprint by people using resources for the wrong reasons. America makes up 5 percent of the population but uses up 25 percent of the world’s resources.

“Inequality is the driver of climate change,” Agyeman said.

Agyeman concluded the lecture by promoting both sides of sustainability, an aspect of which we all should be more aware.