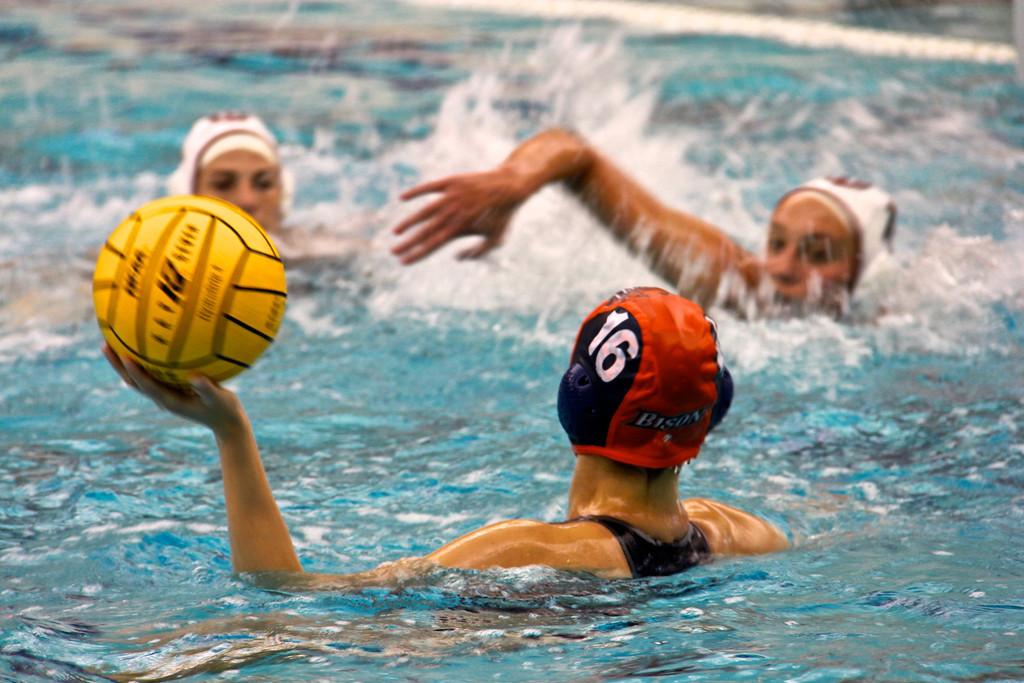 The women’s water polo team had a productive weekend at home, beginning with a tight 7-6 victory over Harvard on April 5 and ending with another 7-6 triumph against Brown on April 6. The Bison also lost a close 8-7 matchup against George Washington following the Harvard match.

The victory against Harvard wiped out a seven-game losing streak to the Crimson, one that had not been broken since 2010. Julianne Valdes ’14 led the team on offense with two goals and three assists, and Hannah Sunday ’16 aided the effort by drawing eight ejections. In addition, Rena Heim ’14 added 11 crucial saves on defense.

At the beginning of the contest, the Bison jumped out quickly as Valdes, Samantha Deana ’14, and Sunday all contributed a goal each to bring the score to 3-2. Despite the ferocious start, the Bison and the Crimson locked into a defensive battle as the second quarter ended scoreless. Countering, Harvard came out strong to begin the second half and scored four goals in the third quarter to give them a 6-4 lead. Despite the deficit, the Bison women came out fighting and owned the last quarter of play, scoring three goals and staying strong on defense to secure the win.

The offensive effort against Brown was led by Mackenzie Ferry’14 who tallied three goals and one assist. Adding to Ferry’s great offensive play was Valdes, Stephanie Ovalle ’14, and Sunday who each had at least a goal. Sunday drew six ejections to give the Bison significant offensive chances and directly contributed to five Bison goals as the squad utilized a frequent 6-5 advantage.

The Bison women came out of the gates strong as Valdes tallied two quick goals to put the Bison up 2-0 early in the first. The first quarter ended with the Bison up 3-2 after Brown countered. In both the second and third quarters, the Orange and Blue outplayed Brown, outscoring them by a score of 2-1 in each stanza. The fourth quarter was marked by heated competition, as the Bears scored twice to move to within one. But strong Bison defense secured the victory.

On the defensive side, Heim stopped a season-high 15 shots while Sayeh Bozorghadad ’15 and Marrs had significant field blocks. The Bison were pummeled by shots at a differential of 31-26, but Heim’s great goaltending kept them in the contest and allowed them to emerge victorious.

The Bison honored their seniors with Senior Day celebrations prior to the game against George Washington. Deana, Ferry, Heim, Ovalle, and Valdes were all honored. Despite a valiant effort, the Bison lost a heartbreaking contest to the Colonials.

Bison play was led by Ferry, Ovalle, and Sunday who each contributed two goals in the effort. There were five ties throughout the game and no team went up by more than two goals. Ferry gave the Bison a 7-6 lead with 3:30 left in the contest, and soon after, the Bison drew an ejection. Despite a timeout call and the player advantage, the Bison could not capitalize and with just 51 seconds remaining, the Colonials scored on a long pass from the goaltender to tie the game at 7-7 with 51 seconds left.

The last minute of the game was extremely riveting as the Colonials gained possession and sent a shot ricocheting of the post. George Washington grabbed the rebound and drew a foul on the Bison. The Colonial shot looked as if it came after time had expired, but the referees added two seconds to the clock and the Colonial women were able to send a goal past Heim to win the contest at the buzzer.

After a great weekend at home, the Bison (10-11 overall, 3-2 conference play) will resume play and hope to continue their momentum starting tomorrow at the CWPA Southern Championships at Harvard.