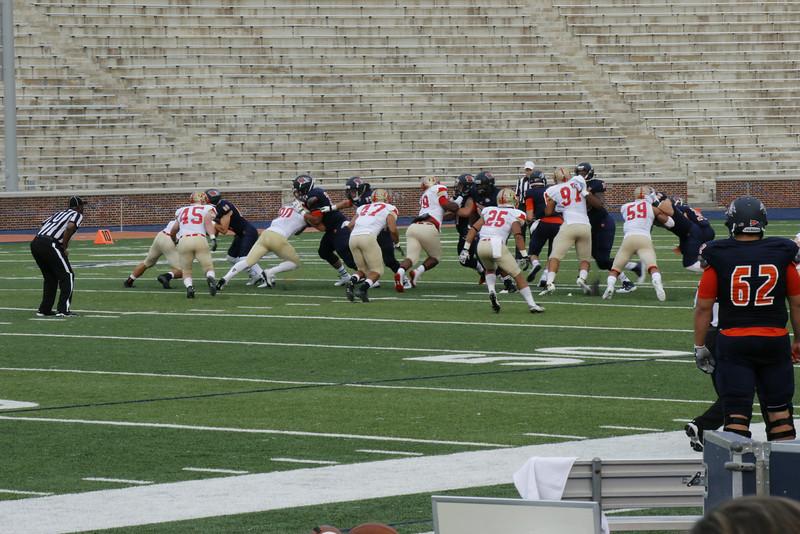 The football team claimed its seventh season-opening win in nine years after several huge plays led the Bison to a 42-38 victory over Virginia Military Institute (VMI) at Christy Mathewson-Memorial Stadium on Aug. 30. R.J. Nitti ’17, making his debut as the Bison’s number one quarterback, threw for 230 yards on 14-25 passing and converted two touchdown passes. The Bison never trailed in the game.

“First of all, we are proud of how R.J. played. He made some veteran throws and had composure throughout the whole game,” Bison Athlete of the Week Josh Brake ’15 said.

The Orange and Blue took a 14-0 lead in the first quarter behind two scores from Matt DelMauro ’16. His first score came on a 10-yard pass from Nitti into the endzone. On the first play of the next Bison possession, DelMauro added a 56-yard touchdown run.

“Our players’ physical conditioning level was important as the game evolved. Because we scored quickly on offense, our defense spent a lot of time on the field. Their effort in the summer and during preseason was evident in that on a humid day, we had no issues,” head coach Joe Susan said.

VMI countered the Bison run with two scores of their own to open the second quarter and even the game at 14 apiece. Nitti concluded a seven-play, 79-yard drive with a 50-yard touchdown pass to Brake to regain the lead. After the Keydets evened the score on another touchdown pass, C.J. Williams ’17 capped the first half with a one-yard touchdown run to give the Bison a 28-21 edge at halftime.

“At halftime, Coach [Mike] O’Connor told us that if we didn’t believe we could score every drive after our great first half, then we never would,” Brake said. “We just kept believing that we could score, and everyone was doing their job. It was so awesome to see our offense play the way we did.”

After a successful defensive drive by the Orange and Blue, a VMI punt was returned 62 yards by Brake to give the Bison a 42-35 lead. The return was the longest by a Bison since 1993. On the next drive, VMI engineered another solid offensive drive, but was held to the game’s first field goal to bring the Keydets within four. The Orange and Blue made key defensive stops at the end of the game to preserve the lead and run out the clock.

“Our offense answered every time VMI challenged the lead. They approached it with confidence and composure. The play that Josh Brake made on the punt return was a game-changing play,” Susan said.

“The experience of winning a close game reinforces that at this level of college football, you must be ready to play for 60 minutes. Our team learned a valuable lesson with this experience,” Susan said.

The Bison’s next test will be an away game against Marist tomorrow at 6 p.m.