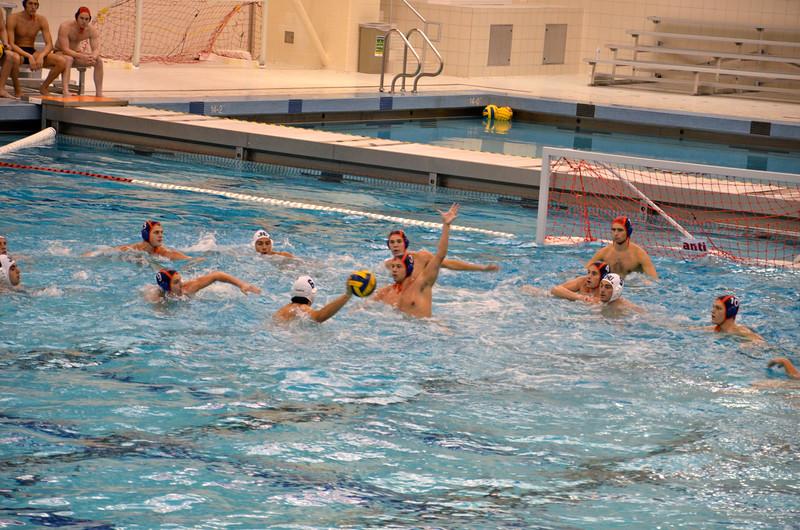 ​The men’s water polo team protected its home pool with a 3-1 record in the Bison Invitational. In the first set of matches on Sept. 13, the Orange and Blue defeated Washington & Jefferson 13-7, and followed that up with a 9-7 win over Johns Hopkins. Mercyhurst fell to the Bison 12-5 on Sept. 14 before Fordham spoiled a chance at a perfect weekend by defeating the Orange and Blue 7-6 in overtime.

​“We came out this weekend eager to win after two losses the previous weekend,” Sean Daley ’17 said. “We definitely played better as a team and got a big league win against Johns Hopkins. It was awesome playing at home with the huge crowd supporting us; that always fires us up and helps us to perform well.”

​After the Bison trailed 2-1 in the first quarter against Washington & Jefferson, they spurred a 9-0 run to create separation from the Presidents. Grant Curry ’18 and Stefan Aleksic ’16 registered four goals and three goals, respectively. Nick Hale ’16 finished with two goals and three assists.

​Johns Hopkins gave the Orange and Blue a tighter contest, but it was Aleksic who made the difference by scoring the go-ahead goal and forcing a steal against the Blue Jays in the final seconds. The Bison never trailed in the game, and goalkeeper Keegan Williams ’15 posted a combined 27 saves on day one.

​The Bison continued their win streak in day two as Aleksic and Curry continued with the hot hand after scoring three goals each against Mercyhurst. The Orange and Blue led 7-1 after the first half and rode that momentum to the win.

In addition to the 12 goals, the defense was led by Hale and Aleksic, who combined for nine of the Bison’s 21 steals. Daley had solid all-around play with a goal, three assists, three steals, two field blocks, one ejection drawn, and one sprint won.

​Fordham brought the Bison run to an end in the tournament after Curry and Nate Hunter ’17 both had shots at the game-winning goal but were unable to convert. An ejection from the Orange and Blue led to a restart that resulted in the Rams delivering the clinching goal.

​“It was a tough loss to Fordham in overtime, but it is still very early on in the season and it is not anything we will hang our heads over,” Daley said. “The team is looking forward to keeping the league game wins rolling this upcoming weekend.”

​The Bison (3-3) have a road trip this weekend against three conference opponents, as they face Navy and George Washington tomorrow, followed by a rematch with Johns Hopkins on Sept. 21.
​