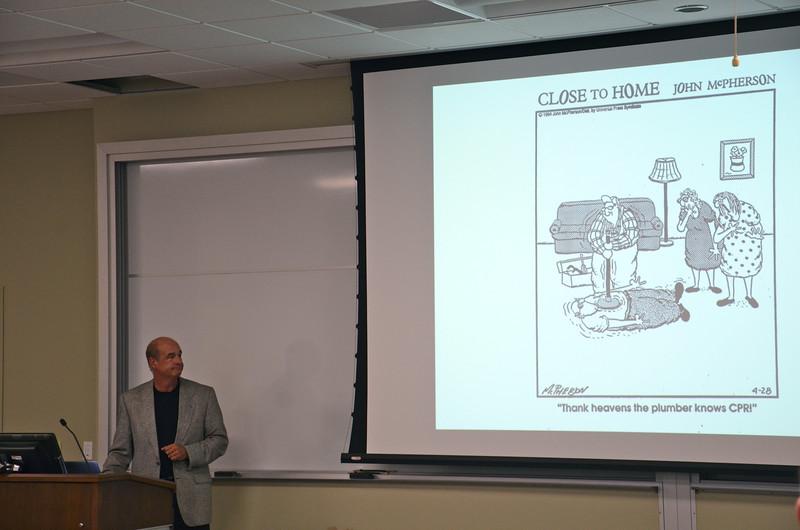 University Alumnus John McPherson ’83 said he always wanted to use his humor somehow, but his practical side kept telling him to become an engineer. During his lecture “Cartooning, Creativity, and Humor” on Sept. 23, McPherson explained that he started to get his cartoon ideas while attending the University. McPherson graduated as a mechanical engineering and English double major, and is the creator of the popular comic strip Close to Home.

“I began getting some of my first cartoon ideas … here at Bucknell. For some reason, [they] just started popping into my head,” McPherson said.

Obtaining a job in mechanical engineering a year and a half after graduation did little to deter his passion for illustration.

“I’d work during the day, at my engineering job, primarily drawing cartoons. Then I would race home in the evenings and draw more cartoons,” McPherson said.

After receiving 160 consecutive rejection letters from various editors, he finally broke into Campus Life magazine. He started working to the point where he was featured in about 40 or 50 magazines on a regular basis, either as an illustrator or cartoonist, he said.

“By the time I left my job, I was making more as a cartoonist than I was as an engineer,” McPherson said.

Creating a cartoon is a detailed process, he said.

“I first draw my cartoon in pencil, and then I go over it with an ink marker. When I’m all done, I erase the pencil lines, scan it into the computer, and use Photoshop to draw in the gray toned areas,” McPherson said.

McPherson consistently drew laughter from the audience while reading aloud cartoon captions in different comedic tones. He also shared an angry letter from a reader who criticized his ferret drawings.

“Ferrets are warm, loving creatures who would never harm a soul. You have done a great disservice to ferrets and ferret owners everywhere and I am thoroughly disgusted with you,” the letter said.

“My children were delirious … They said, ‘Can you do a cartoon about a PlayStation?’” McPherson said.

McPherson’s cartoon inspirations came from Gary Larson, creator of The Far Side, and Charles Addams, creator of The Addams Family. McPherson concluded his lecture with advice for inspiring cartoonists.

“Get on the phone and call people … When you actually talk to someone it will open doors for you. Let them hear your voice,” McPherson said.