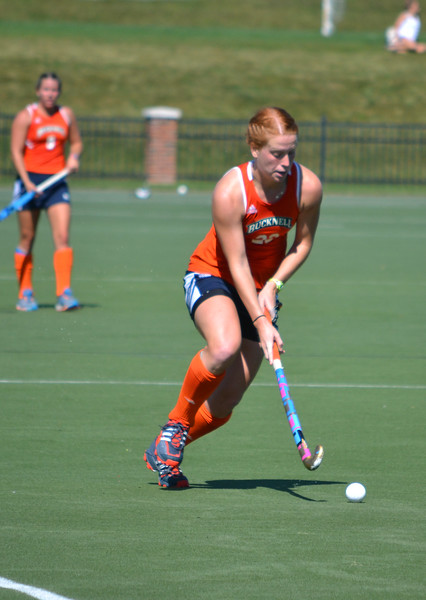 The field hockey team defeated American 1-0 on Sept. 27 during its Patriot League opener at Graham Field. Cassie Lawrence ’15 scored early to take the lead, and goalkeeper Shannon Keen ’16 kept that lead with her third shutout of the season.

Less than seven minutes into the game, Lawrence scored the decisive goal of the match. Abby Watson ’16 passed to Lawrence, positioning her behind the Eagle defense. Using her own rebound, Lawrence provided the clinching goal.

“We established in the first 20 minutes of the game that we were not only going to be competitive, but that we believed in ourselves and our team. That was awesome to see!” head coach Jeremy Cook said. “Another huge positive is that our defense bends, but does not break very often.”

The Eagles and Bison played the first half evenly, with most play occurring in the center of the field. Even with such little offensive pressure, American had possession of the ball for most of the second half, and the Orange and Blue were able to play solid defense to prevent the tying goal. The Eagles only managed three shots, with two on goal in the second half.

Prior to the game, Keen had been ranked in the top-10 nationally in goals against average and save percentage. She succeeded in stopping all of American’s shots on goal. The Bison defense has allowed less than a goal per game this season.

“The highlight of the game was our goal in the beginning of the first half. It gave us a lot of momentum right from the start,” Watson said. “Our defense showed great composure and patience getting it out of our backfield towards the end of the second half as we tried to hold onto our lead.”

After this win over the defending Patriot League champions, the Bison improved to 5-2 overall and 1-0 in the Patriot League. The difficult non-conference schedule has prepared the squad well for Patriot League play, as the Bison are just outside the top-25 in the RPI rankings. Before being defeated by the Bison, the Eagles had won 11 consecutive regular season conference games.

“In the future, hopefully we can improve on maintaining possession in our attacking end for extended periods of time,” Watson said.

The Orange and Blue return home this weekend with two games. They host nationally-ranked Boston University on Oct. 4 at 11 a.m. On Oct. 5, the Bison will face Cook’s alma mater, Drexel, at 1 p.m.