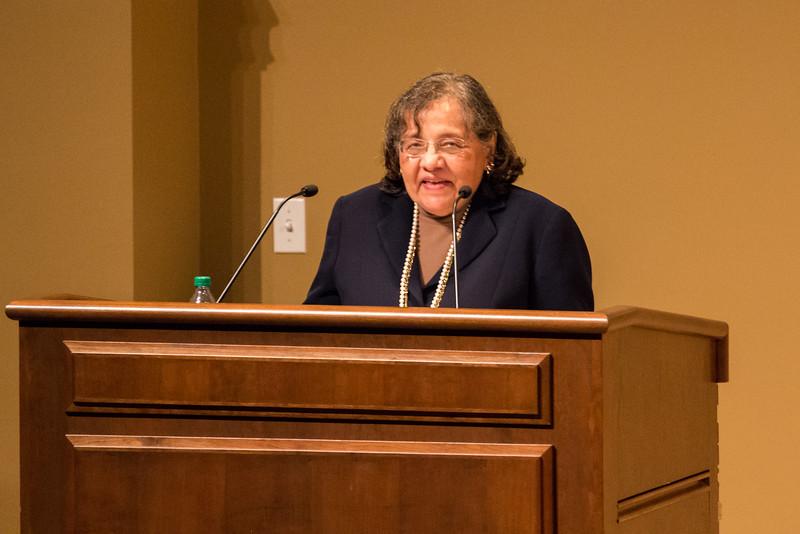 Diane Nash, 1960s civil rights activist, said not to look unto others for social change; we must hold ourselves responsible.

Nash spoke to students and faculty about the present and future applications of the philosophy that reinforced the Civil Rights Movement in Trout Auditorium on Sept. 30. She coordinated the Freedom Ride campaign, founded the Student Non-violent Coordinating Committee, and assisted in the integration of lunch counters. According to Nash, if American citizens had not taken action and stood up for their rights, we would still be waiting for politicians to resolve segregation.

“People research and talk about how things should be done, but for anything to work, you must do it,” Nash said to a full crowd. “While individuality emerges through leaders, charismatic leadership has not freed us and never will. People often perceive the Civil Rights Movement as being the movement of Martin Luther King, Jr. It was not. It was the people’s movement. If people think this way, you will be likely to say ‘I wish we had a great leader like MLK.’ You have to think ‘what can I do?’”

Taking action is important, but acting out of violence and hatred will not work. One way to bring about social change is by applying Agapic Energy, Nash said.

Nash coined the term “Agapic Energy” while attending Fisk University to more accurately convey the word ‘nonviolence’ and Gandhi’s term ‘Satyagraha.’ Agapic–derived from the Greek root ‘agape,’ or love for humanity–seemed to be a good fit.

“People are never your enemies. Your enemies include sexism, unjust political and economic systems … The problem with violence is [that] you often kill individuals and leave the oppressive system, leaving the true problem untouched,” Nash said.

“Very often we give away our power because we don’t analyze a situation … The only person you can change is yourself … When you change yourself, the world has to change according to you,” Nash said.

“The movement of the 60s provides us with a legacy of how to resolve the problems we are facing today,” Nash said.

Nash’s intergenerational humor elicited laughter from the crowd throughout her speech.