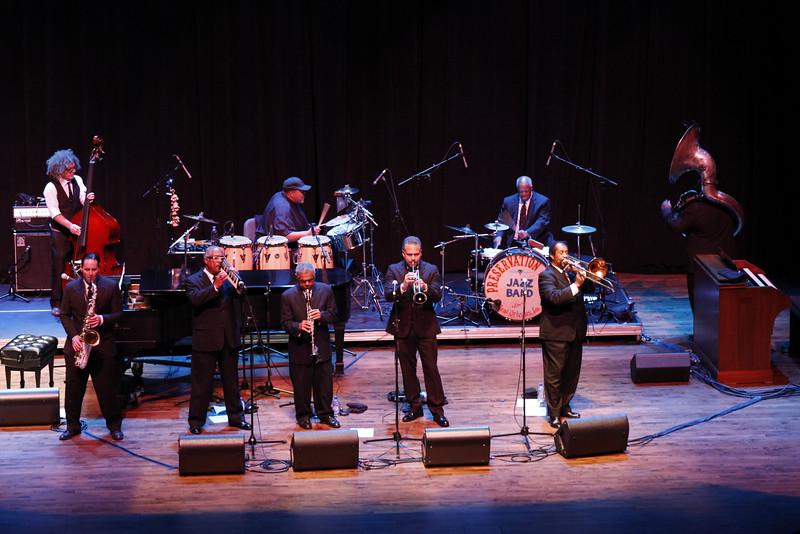 Jaffe is the son of Allan Jaffe, who organized the band in 1963. Jaffe picked up where his parents left off and joined the band, contributing his talent for both bass and tuba. He also began a series of initiatives that focused primarily on expanding listenership to the music both at the Hall and on tour.

The Preservation Hall Jazz Band, which derives from the famous French Quarter venue, Preservation Hall, in New Orleans, La., has performed around the world and toured with numerous artists ranging from My Morning Jacket to The Blind Boys of Alabama. This is the first time the band has toured the country with Toussaint, a singer, pianist, songwriter, and producer who has been inducted into the Rock and Roll Hall of Fame.

During the concert, the Preservation Hall Jazz Band’s performances included “Come With Me,” “Go to the Mardi Gras,” “Tootie Ma Is a Big Fine Thing,” “I Think I Love You,” and “Rattlin’ Bones.”

Halfway through the show, Toussaint was introduced to the audience, who sang along to his songs while he played the piano. Toussaint sang a variety of songs, including “Mr. Mardi Gras,” “A Certain Girl,” “Get Out of My Life, Woman,” and “Yes We Can Can.” At one point, Toussaint showered members of the crowd with beaded necklaces, Mardi Gras masks, footballs, and Frisbees.

The Preservation Hall Jazz Band and Toussaint treated the crowd to a wonderful evening of music in the Weis Center. The next performance in the Weis Center Series is a modern dance show featuring the Mark Morris Dance Group at 7:30 p.m. on Oct. 24.