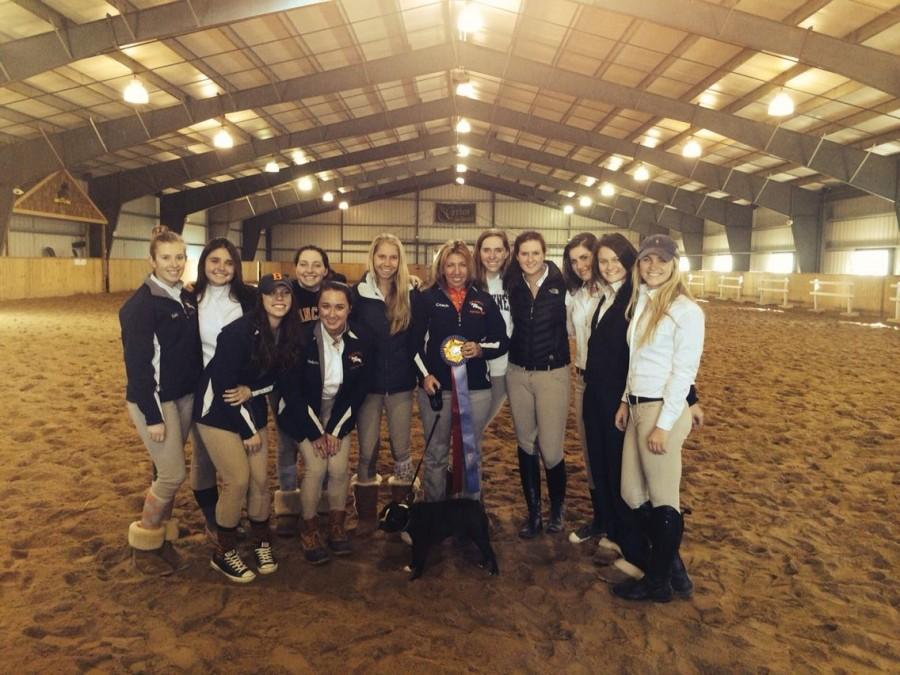 The equestrian team participated in a show at The Grier School on Oct. 26 and tied for the top spot in the show with Dickinson with 31 points each. In the process, the Bison beat out host and powerhouse Penn State, a major accomplishment for the team this year.

The Orange and Blue jumped out to an early lead in the morning, but the team started to slow down as the show progressed. As other teams began to climb toward the top of the rankings, several Bison won their classes toward the end to push the Bison back into the lead and win the show.

As a result, the Bison topped Penn State for the first time in decades, a feat not easily accomplished.

“Beating Penn State on its home turf was an incredible achievement. They have been the top team in our region for over 30 years and have consistently dominated the shows,” Morgan Manchester ’15 said.

This show continues what looks to be a stellar year for the Orange and Blue, and captains Manchester and Carly Riemann ’15 are very excited with how the team is shaping up this year with nine total teams in the region.

“Our riders have been very competitive each week, but last week was especially great with a bunch of great ribbons. We are so excited to see how the year progresses, especially since we have such a nice group of girls that all get along so well,” Riemann said.

The Orange and Blue, who ride at Fox View Farm, have strong chemistry with other members of this year’s squad on both the show team and the home team. Although they have been very successful thus far through two shows, this is more than just a sport for them.

“The members of the Bucknell equestrian team mean home for me. Riding has been a lifelong passion of mine, and to see each individual and the team as a whole succeed is heartwarming. Having members who are incredibly invested only helps to make this happen,” Manchester said.

The Bison have a show again Nov. 1, hosted by Gettysburg and Wilson College. Additionally, the team will continue later in the month at Black River Farm on Nov. 15-16.

“We are always looking for new members to join the team, and we welcome riders of all levels, from beginner to advanced. We will have an interest meeting again in the spring, so please come if you are interested!” Riemann said.