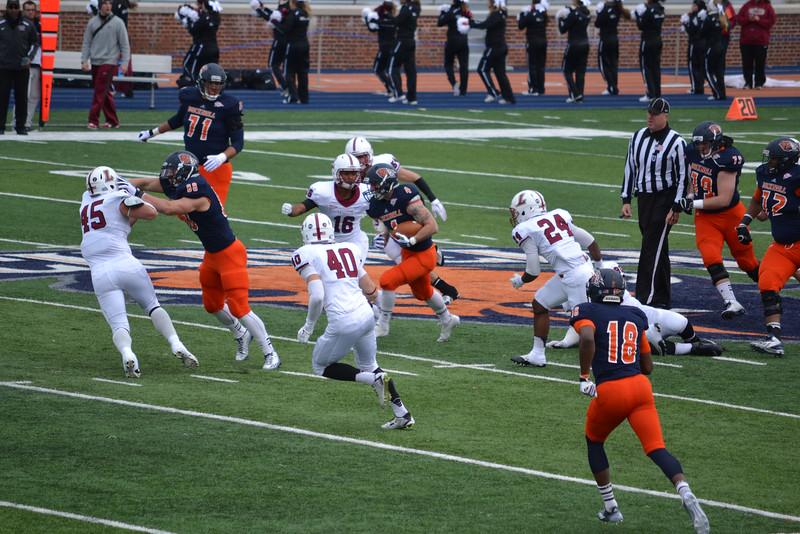 ​Homecoming Weekend provided a thrilling 27-24 overtime win for the football team over Lafayette on Nov. 1 in front of an ecstatic home crowd. Derek Maurer ’15 nailed the game-winning field goal in overtime after key defensive stops held the Leopards scoreless in their overtime drive. The victory moves the Bison to a 7-1 overall record (3-0 Patriot League).

​“It feels great to be able to come back and win on Homecoming. No win in the Patriot League is easy to come by,” Maurer said. “The team did a tremendous job of battling back from adversity. I believe this shows the maturity and determination of the players and coaches.”

​Tight end Jake Hartman ’15 and wide receiver Will Carter ’17 shined for the receiving core. Hartman posted seven catches for 134 yards and three touchdowns, including one pass from reserve quarterback Trey Lauletta ’15 with 1:01 left in regulation to force overtime. Carter continued his dominance with 104 receiving yards on five catches.

​Lafayette took a 7-0 lead late in the first quarter, but the Orange and Blue responded two minutes later after R.J. Nitti ’17 delivered a 45-yard touchdown pass to Hartman. The second quarter featured another Hartman touchdown from 19 yards out. The Bison led 14-7 at halftime.

​The Leopards came out on fire in the second half with back-to-back scores to take a 21-14 lead. Maurer registered a field goal to end the scoring in the third quarter.

​A Lafayette field goal with 9:20 left in the game set the stage for a Bison comeback. Lauletta entered in the final minutes and produced a drive that culminated in the Hartman touchdown that sent the game into overtime.

​“As a backup quarterback, you always know you are one play away from having to play. I prepare myself each week like I am going to be the starter because you just never know when your time will come,” Lauletta said.

​The Bison defense insured that all the team needed was a field goal to secure the win. Demetrius Baldwin ’15 and Ben Schumacher ’17 each sacked the Leopard quarterback in the overtime period to force Lafayette out of field goal range and turn the ball over on downs.

​C.J. Williams ’17 ran the ball on three consecutive possessions to inch closer to the endzone. After that, the game was in Maurer’s hands, as he split the uprights from 33 yards out. His teammates stormed the field after the decisive field goal.

​“Although a quarterback receives much of the praise and individual accolades after a win, the result would not be possible without each and every teammate of mine,” Lauletta said. “I am extremely grateful to have teammates that believe in my abilities as a quarterback, and perform at the highest of levels.”

​Nitti finished the game with 252 yards and two touchdowns on 13-25 passing, while Lauletta was 4-6 passing with 66 yards and a touchdown.

On defense, Baldwin and Lee Marvel ’15 had two sacks each, while Evan Byers ’15 registered six of his seven tackles on Lafayette’s final two drives in regulation. As a team, the Bison pressured the offense with seven sacks for 57 yards.

​This game sets the stage for the Bison’s toughest test to date, as they battle No. 9 Fordham (8-1 overall; 4-0 Patriot League) at home on Nov. 7 at 6:30 p.m. The game will be nationally televised on CBS Sports Network.