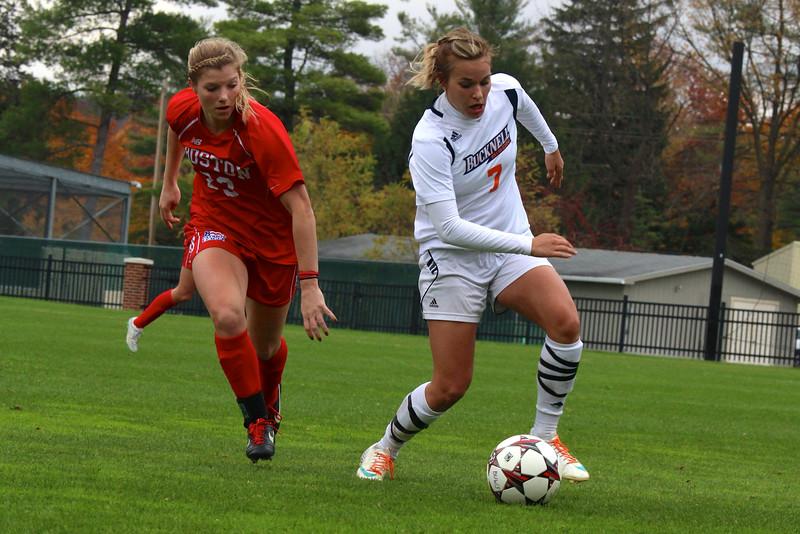 The women’s soccer team ended its regular season with a 2-1 Senior Day loss to Boston University on Nov. 1, but the fifth-seeded Bison defeated fourth-seeded Army 2-1 at Clinton Field in the Patriot League Quarterfinals on Nov. 4. The team finished with a 10-8-2 overall record and 4-4-1 in the Patriot League, and will now advance to the semifinals.

Before the Patriot League Tournament, the Bison faced Boston in the regular season finale. The first goal came from the Terriers as they scored in the 34th minute. Just three minutes later, Boston scored again to end the half with a 2-0 lead.

The second half provided more opportunities for the Bison as they had extra attacking players out on the field. In the 67th minute of play, the Bison were able to turn the tide with a give-and-go between Meghan Holtz ’18 and Madison Loos ’16, and Holtz took her first career goal for the Bison. Kelsey Witt ’17 attempted to make a move in the final minute of play, but was unable to score. Goalkeeper Jessie Ashworth ’16 had four saves for the Bison.

“Our response and performance in the second half was terrific. We scored a great goal and though we simply ran out of time, we felt like we could come all the way back. Having to come back from being down is not something we want to do, but it is great to know we have the ability to do so,” head coach Ben Landis said.

The Orange and Blue traveled to face Army in the first round of the Patriot League Tournament and were able to upset them. Cora Climo ’17 started off the quarterfinal game to put the Bison in a 1-0 lead in just under 10 minutes of play with her second goal of the season. In the 22nd minute, Ashworth had her best save of the night and managed to keep Army scoreless until halftime.

About eight minutes later, the Bison had a huge game-changer. Hannah Bonotto ’15 topped off Climo’s corner kick into a seemingly open net until an Army defensive back reached out and handled the ball to tip it over the crossbar. The referee gave the Bison a penalty kick, giving the Army player a red card for her intentional handball. Bonotto managed to score the PK to give the Bison a 2-0 lead at halftime.

Army scored in the 53rd minute to bring the score to 2-1, but the Black Knights were unable to complete the comeback.

“Something the team feels strongly about improving is competing for a full 90 minutes and not only for the second half. In order to win the game we must compete for the full game,” Holtz said. “Our goal for the year has remained constant to win the Patriot League Tournament and that is simply what we hope to achieve during this Tournament.”

The Bison will now advance to the semifinals to take on top-seeded Colgate on Nov. 7 at 5 p.m. in Hamilton, N.Y.