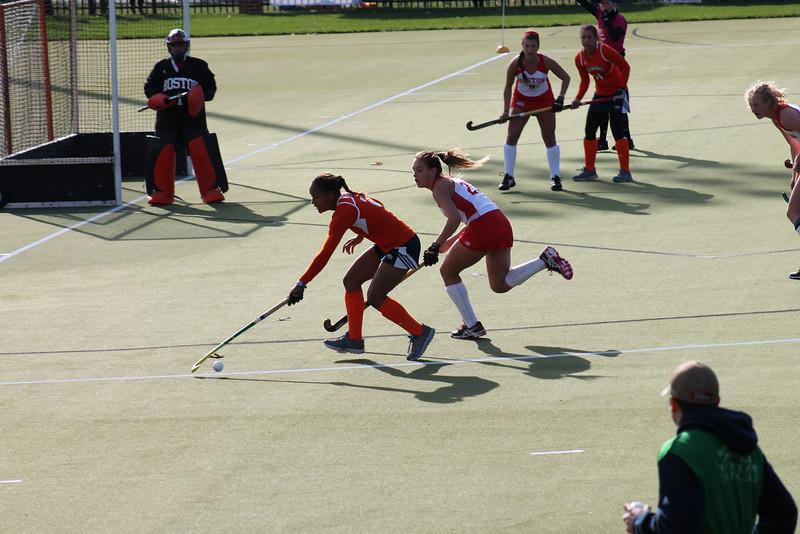 With an undefeated record in Patriot League play during the regular season, the field hockey team entered the Patriot League Tournament on Nov. 7 as the top seed with a tough semifinal match-up against the Colgate Raiders. After defeating Colgate 2-0 at home, the Bison hosted Boston University in the championship game the next day, but suffered their first Patriot League defeat 2-1, ending their 2014 season.

The Bison took on fourth-seeded Colgate in the first semifinal match of the Patriot League Tournament. The strong offensive effort was the key to victory, as the Bison out-shot the Raiders 22-3, with 11 shots in each half.

The match remained scoreless for the majority of the first half, as the Orange and Blue struggled to capitalize on their penalty corners. However, the collaborative effort of Cassie Lawrence ’15, Kelsey Mucelli ’15, and Liz Wills ’15 resulted in the first goal of the day for the Bison.

The second half tested goalkeeper Shannon Keen ’16, as the Raiders created multiple threats to end the shutout. With about four minutes left in the match, Watson tipped a shot in on goal and built the Bison lead to two. The game pushed the Orange and Blue into the championship round against No. 20 Boston.

The second-seeded Terriers posed a tough match-up for the Bison in the championship round, as the team’s two-goal lead proved to be too big for the Orange and Blue to come back from. Within the game’s first 12 minutes, Boston capitalized on a penalty stroke to score the first goal of the game. Despite a strong retaliation, the Orange and Blue struggled to even out the score before half.

“We came out of the locker room with [a lot] more confidence in the second half, realizing that if we didn’t play the way we know how and leave it all on the field, we wouldn’t have any more chances to prove we could do it,” Lawrence said.

Although the energy and confidence was much higher on the Bison bench, the Terriers managed to boost their lead to two. Boston’s keeper played an essential role in keeping the Bison out of the back of the net in both halves, but the Orange and Blue were able to sneak one goal past her and cut Boston’s lead in half. Despite head coach Jeremy Cook’s decision to pull the goalie with four minutes left, the Bison were unable to find the equalizing goal.

The Orange and Blue finished this historic season with a record of 13-6. Although disappointed, the team’s seniors worked extremely hard from the beginning.

“We didn’t give up; chance just fell toward our opposition on this one. There is so much to be proud of and thankful for when everyone leaves it on the field,” Mucelli said.