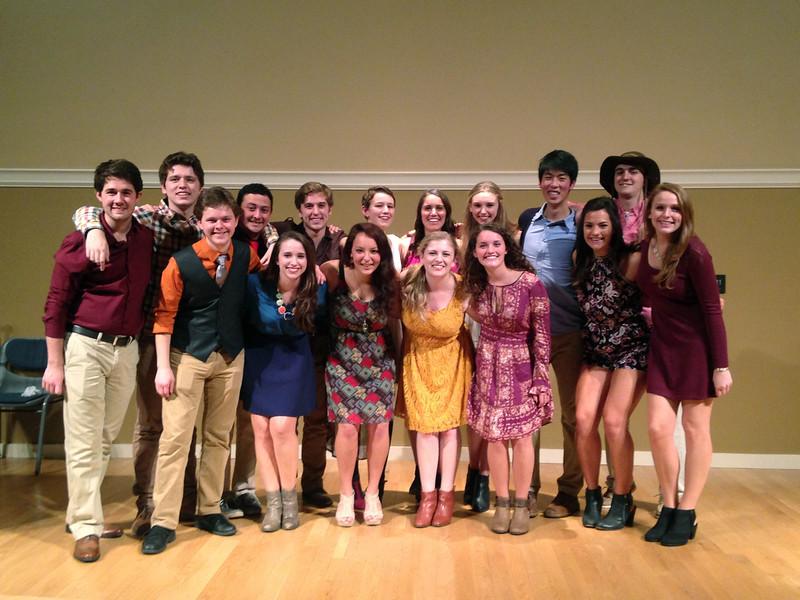 Two Past Midnight hosted its Fall Concert in Trout Auditorium on Nov. 8 at 7 p.m. Special guests The Extreme Keys, an a cappella group from Bryn Mawr College in Pennsylvania, also made an appearance.

To kick off the concert, The Extreme Keys performed a wide variety of songs such as “Bottom of the River” by Delta Rae and “Lego House” by Ed Sheeran. They also sang a 90s medley that consisted of some favorite throwback tunes like “Say My Name” by Destiny’s Child, “Larger Than Life” and “I Want It That Way” by the Backstreet Boys, and “ … Baby One More Time” by Britney Spears.

Two Past Midnight, one of the University’s three co-ed a cappella groups, then took the stage. They performed songs such as “Landslide” by Fleetwood Mac with soloist Pearl Bass ’18, “Try”/”Pretty Hurts” by Colbie Caillat and Beyoncé with soloists Courtney Buckworth ’17 and Meghan Toft ’15, and “Holocene” by Bon Iver with soloists Devon Calhoun ’16 and Ellie Frazier ’15.

This was the last Fall Concert for senior members of Two Past Midnight.

“Two Past Midnight is my family on this campus,” Frazier said. “I’ve grown as a musician, as a person, and as a friend. The music we make reflects the tastes and talents of the group. Learning music and bringing it to life is such a dynamic process because every group member gives input as to how the song should sound and contributes to making meaningful and impactful music.”

“My time with Two Past Midnight has been one of the most rewarding experiences of my life,” Toft said. “We are such a close-knit group, and working extremely hard to achieve the common goal of making great music brings us even closer together like a family. I am definitely going to miss Two Past once I leave Bucknell. No experience will ever be quite like this one.”