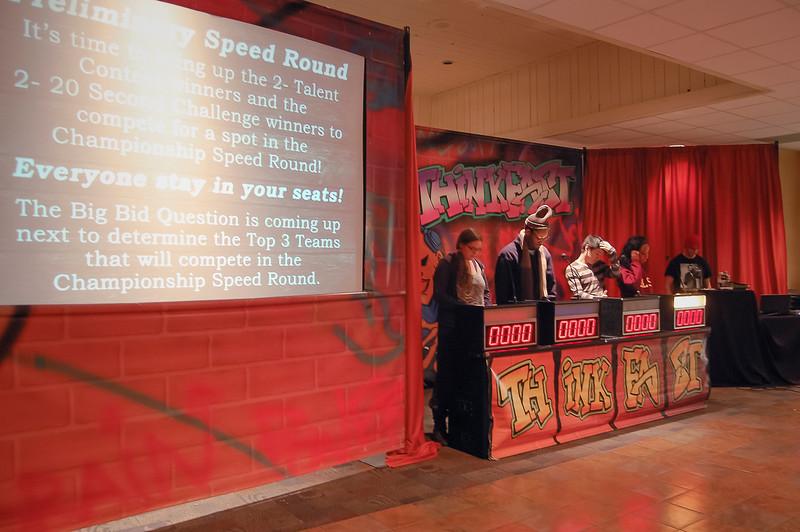 Students gathered in the Bison at 8 p.m. on Jan. 24 for ThinkFast, an interactive pop culture trivia game show involving teams competing for $200.

Each player in every team received a remote control and answered multiple-choice questions that ranged from naming the band known for its hit single “September” in 1978 to naming the celebrity who spit gum in Zach Galifianakis’ face on “Between Two Ferns.”

News, Tailors, Sapphire, Neptune, Vegans, Miami, Diamonds, Hope, Mavericks, and Aliens were only 10 out of 44 teams that participated in the wheel-spinning game.

Besides answering questions, contestants also participated in a dance off and a singing contest and informed audience members what they would do if they had a million dollars to plan a party. Afterwards, teams voted on the best competitor from each challenge, and the winners competed in the Preliminary Cash Round at the end of the game show.

Once the team competition was over, the top three teams faced off with the winners of each task. Two groups became the winners, with the first one receiving $120 and the second receiving $80.

“This past year Uptown has been working to reinvent itself while also promoting the numerous event options for clubs and organizations,” Director of Campus Activities and Programs Michael Duignan said. “For the first time ever, we had an event outside of Uptown and chose the Bison for its central location. Uptown also reached out to ACE for its support and assistance to help draw an audience for the event. It was a perfect partnership and something we would like to continue with ACE and other organizations.”

ThinkFast had 81 participants, 44 groups, and 40 observers. After ThinkFast ended, everyone headed uphill to Uptown in Swartz Hall for Wings and Things.

“Wings and Things, following ThinkFast, had a great crowd where students were able to enjoy delicious food and company of their friends,” Greta Savickaite ’15 said. “Uptown allows students to interact with other students from campus and meet individuals that they may not have the opportunity to during their daily schedules. If there are any events that students would like to see brought to campus, Uptown staff and the CAP Center would love to hear their thoughts and possibly help to carry out those events.”