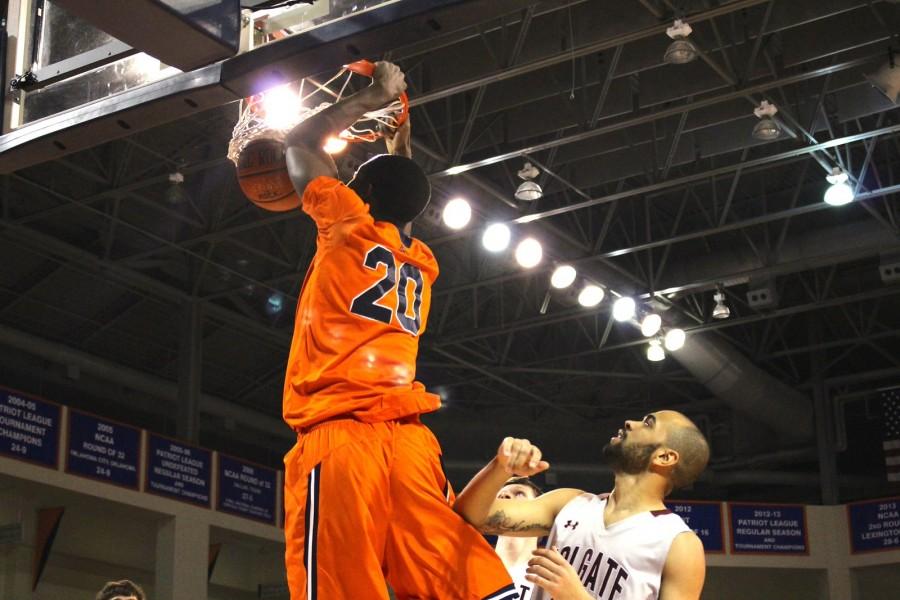 In a battle between the top two teams in the Patriot League, Colgate capitalized on a rare out-of-bounds turnover by the men’s basketball team and sunk the deciding basket with a second remaining to claim the 71-69 victory over the Bison on Jan. 31 in Sojka Pavilion. In the next game, Lafayette erased a 17-point deficit and handed the Bison an 84-74 overtime road loss on Feb. 4.

“The league is really unique this year in how competitive it is. Top to bottom every team is talented and has the potential to win on any given night,” Cory Starkey ’15 said.

The last sequence of the Colgate game included a rare call by the referee who declared that Ryan Frazier ’16 ran out of bounds before receiving a bounce pass from Steven Kaspar ’15. This turnover led to the Raiders’ game-winning shot from the right elbow. With 1.1 seconds left, Colgate disrupted the Bison’s inbounds pass to end the game.

In the early part of the first half, Colgate maintained a tiny lead over the Orange and Blue, but the Bison closed the half on a 10-2 run. A pair of Stephen Brown ’18 layups capped the run, including the last basket set up by a hustle steal. The Bison led 35-27 at the half.

With 9:53 remaining, the Raiders nailed a three-pointer to take their first lead of the game since the previous half before John Azzinaro ’17 countered with a three of his own. Five minutes later, Chris Hass ’16 drained one of his five three-pointers to give the Bison a 61-59 advantage.

Kaspar assisted Frazier on a layup that put the Orange and Blue up five with 2:14 to go. Hass missed his only three-point attempt with under a minute left, which opened the door for Colgate to sink a three of its own to tie the game and set up the winning basket.

Hass scored 18 points on 50 percent shooting. Nana Foulland ’18 posted 14 points and six rebounds, while Frazier rounded out the double-digit scorers with 11. Kaspar was the main catalyst for the Bison, delivering seven of his team’s 15 assists.

Colgate held a huge advantage in points in the paint by outscoring the Orange and Blue 44-22 in that area.

“I’m looking forward to see how we respond coming off the loss to Colgate,” Starkey said. “It will say a lot about our team–how we respond this week in practice and how that translates to games.”

The Bison had a strong first-half showing against Lafayette. J.C. Show ’18 was on a roll, scoring 17 points and going 5-9 from three-point range. This outburst boosted the Bison to a 38-23 lead at halftime.

Unfortunately, the Leopards engineered a huge run to cut the deficit to five with 9:42 left and eventually took a 56-55 lead at the 5:28 mark.

In the closing moments of regulation, Kaspar converted a crucial three-point play with 19 seconds on the clock to put the Bison up two. Lafayette answered with a layup, and the ball was placed in Hass’s hands whose shot missed the mark and forced overtime.

The Leopards rode the momentum from the second half and outscored the Orange and Blue 17-7 in extra time. Hass finished with 13 points while Starkey added 12 points and nine rebounds.

“We have shown that when we play well, we are capable of being the best team in the league, but when we don’t play at our best we can be a very average team,” Starkey said. “There is no margin for error and we need to play to the best of our ability every game in order to win.”