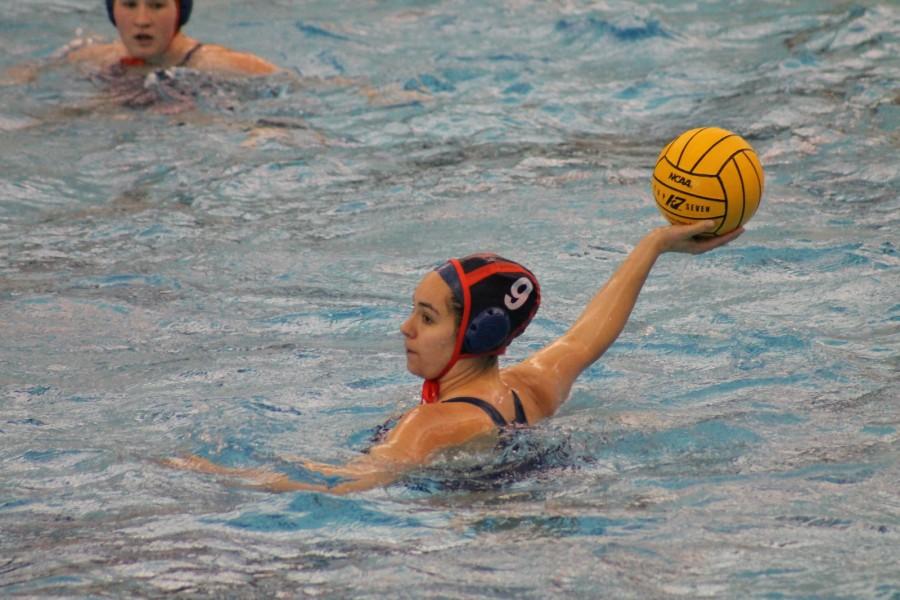 Ally Furbay , Staff Writer
The women’s water polo team faced the monstrous challenge of competing in six games in less than 48 hours the weekend of Feb. 13-15. Stepping up to the challenge, the Bison finished strong with five wins and just one loss.

Starting off the tournament, the Bison played Notre Dame College opening night. If the team’s objective was to make a statement in the season opener, the Bison surely proved a point, leading 7-2 at half time. The Bison had debuted a very well rounded attack as eight different players put points up on the board  including Eleanor Marrs ’16 with four, Hannah Sunday ’16 with three, and Gigi Joudrie ’18 and Colleen Barron ’18 each with two while seven other players handed out assists. Due to the Orange and Blue’s strong start and clear dominance in the game, Head Coach John McBride was able to play almost his entire team in the game against Notre Dame.

The game against George Washington began in a back and forth battle as the score remained tied for a good period of play. The Bison turned up the heat in the second half, outscoring George Washington 8-2. Marrs led the Bison on the attacking end with a career high eight points, three goals, and five assists. Joudrie and Sunday added onto the score with three goals each while Shyla Lintz ’18 added two. Goalie Manuela Herrera ’18 posted seven saves to keep the Bison in the lead.

Against Siena, the Bison repeated much of the same pattern in the game against George Washington. After being tied for the beginning half of the game, the Bison went on a five goal run to bring the score, which would be the final, to 10-7. The Bison again had a very dynamic offense with eight different players scoring goals, with Marrs and Kendyl Johnson ’18 each leading the attack with two apiece. In goal, Haley Derrod ’17 played for the first time this year and contributed 11 saves.

On Feb. 15 the Bison lost their first and only game to No. 19 Hartwick. The Bison fell behind 2-0 in the first few minutes of play and never truly recovered from the two goal deficit. The Orange and Blue came back with seven of their own goals, but it was not enough as Hartwick finished with a strong offensive, making the final score 13-7.

The Bison bounced back quickly from the loss as they went on to win the last two games of the tournament against VMI (14-12) and St. Francis Brooklyn (13-3). The Bison battled hard in the game against VMI, jumping ahead 5-2 in the second quarter. VMI caught up to tie the score to 9-9 at one point, but in the third quarter the Bison drew ahead led by a penalty shot scored by Marrs to keep the lead for good. St. Francis Brooklyn proved to be an easy win and end to the weekend games for the Bison. Marrs and Sunday led the offensive with three goals each, followed by two goals each from Lintz, Johnson, and Marta Considine ’18, and one from Barnett. The Bison scored 10 unanswered goals and kept the Terriers from scoring for more than 25 minutes during the game.

Sunday had an exceptional weekend performance, as she scored a career-high seven goals, which tied the Bison’s record only three other players have achieved in history. Sunday was later named Bison Athlete of the Week for her outstanding performance in the tournament that helped to lead the Orange and Blue to a 5-1 season opening record.

The Bison will return to Kinney Natatorium to play four conference games the weekend of Feb. 28.