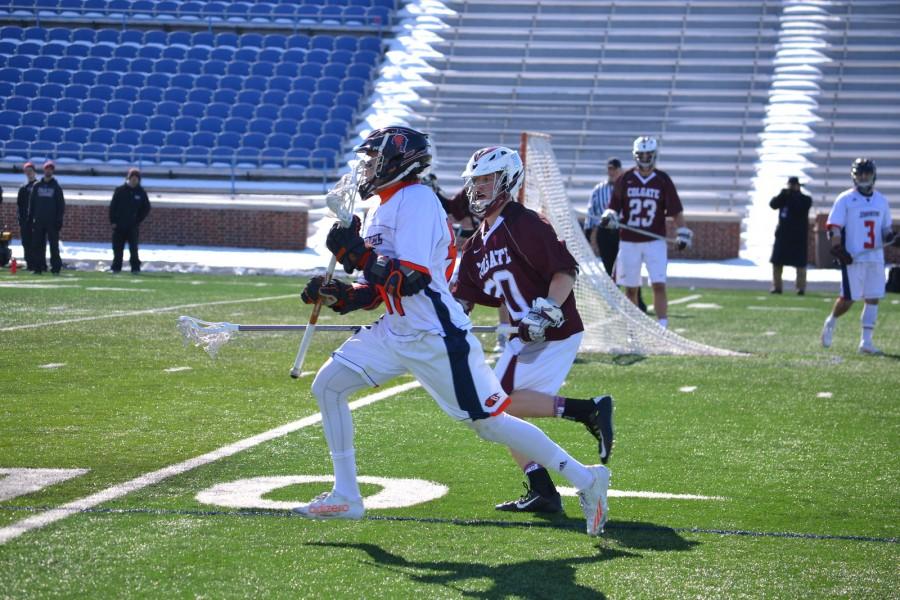 The men’s lacrosse team collected a win on March 14 against No. 20 Holy Cross with a 15-6 domination in a fight for first place in the Patriot League at Christy-Mathewson-Memorial Stadium. Will Sands ’18 and David Dickson ’15 were standouts during the Holy Cross game, contributing to nearly every goal scored by the Bison. The Orange and Blue went on to upset No. 12 Brown 10-9 on March 17 to improve to a 6-2 record for the season. Thomas Flibotte ’16 had the game-winning goal in sudden-death overtime.

“Our team is starting to develop a really special chemistry and we showed it,. We just want to improve and get better every day as a team. We have high goals but we need to take it one game at a time,” Sands said.

The Holy Cross game was tied up at 4-4 two minutes into the second quarter. Throughout the remainder of the game, the Bison proved to be victorious, outscoring the Crusaders 12-3, which matched the team record for victory margin against a nationally-ranked team. The tie-breaking goal was scored by Dickson and assisted by Sands. Later on, Filbotte scored to give the Bison an 8-4 lead at the half. Tommy O’Connor ’17 and Quinn Collison ’17 also tallied goals for the Bison. Brock Ghelfi ’16, Alex Spring ’16, Sam Hahn ’18, Jake Dunlop ’18, and Ben Kellar ’15 also had solid performances in the game, with several ground balls and caused turnovers. Goalie Sam Grinberg ’15 finished the game with eight saves.

“We have had a lot of close games this year and it was nice to finally have a blowout, especially against a ranked team. I hope we just continue to grow as a team and not make the same mistakes repeatedly,” Flibotte said.

In the team’s following game against Brown, Sean Doyle ’16 scored the opening goal for the Bison, which was followed by five straight goals from Brown. Alex Ryan ’15, Kyle Shanahan ’16, Dickson, and Ryan Joseph ’15 contributed to a few more goals for the Bison, giving them a 7-5 lead. Brown tied it back up with just 49 seconds left in the first half. After several goals, it was tied up 9-9 at the end of the second half, leading the game into overtime. Just under three minutes in, Flibotte scored to give the Bison the win. Grinberg ended with 12 saves, keeping the Bison alive.

“We have a lot to improve upon and we are getting better each and every week. It has been a focus of ours all year to never be satisfied and to not get complacent even after a string of wins. We have a very unselfish unit and I look forward to seeing this team reach its true potential,” Dickson said.

The Bison will play a Patriot League game at Boston University on March 21 at 2:30 p.m.