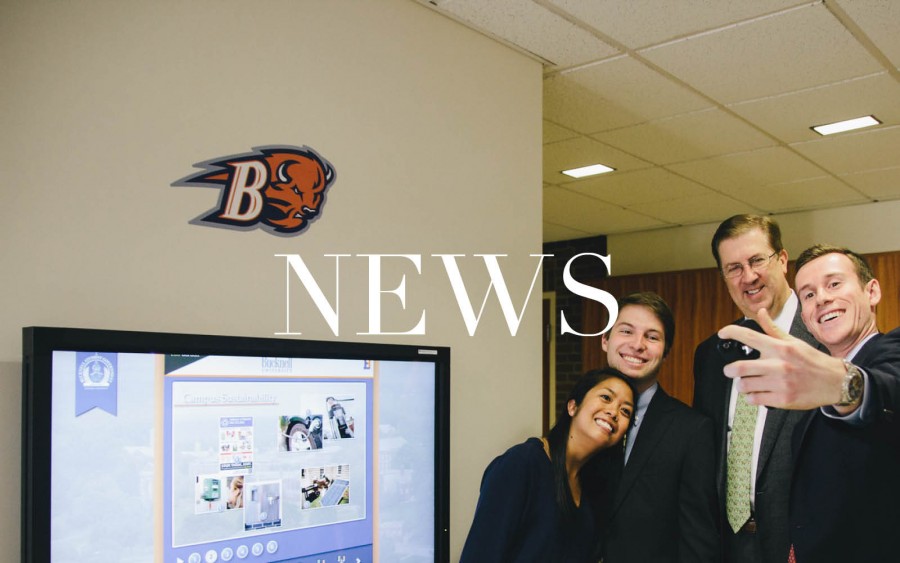 Another school year is coming to a close, and the Class of 2015 is preparing to graduate. To leave their mark on campus, Bucknell Student Government (BSG) presented their traditional Senior Tribute gift: an Eco-Screen and its supporting technology infrastructure.

“The EcoScreen technology will help the Bucknell community conceptualize energy usage and serve as an educational tool to promote financial and environmental sustainability. The Class of 2015 is pleased to partner with the University’s initiatives through programming that will extend beyond the classroom to set the standard for a more sustainable Bucknell,” Class of 2015 President Colin Hassell ’15 said.

The Eco-Screen was selected as the Senior Tribute as a way to give back to the University. The senior class congress came up with the idea for the Eco-Screen by working with the Campus Energy Manager and looking at the KLARC for inspiration. The KLARC has reduced its energy consumption by nearly 50 percent in the past few years.

“We felt that by providing the technology to track energy consumption on a large scale, we would help Bucknell make further strides in reducing its energy footprint in the years to come,” Hassell said.

Although the Senior Tribute seeks to positively impact the University by reducing its footprint, some students have expressed disappointment that the tribute is a piece of technology that will one day be outdated.

“I, and many of my classmates, feel that while the tribute is a cool technology that will have benefits for campus, it will be outdated in several years and is not something that will have a lasting impact on campus. It would have been nice to have something more permanent to represent our class,” Lexi Klein ’15 said.

The Senior Tribute will officially be unveiled at Senior Sunset on April 28.