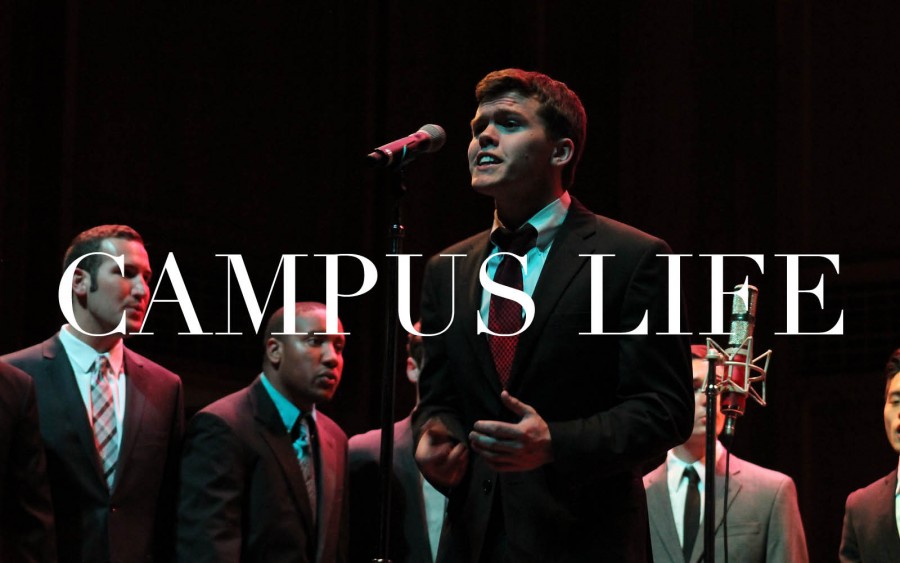 The Bison Chips took the Weis Center stage, equipped with their signature humor, showmanship, and wholesome vocals, for Chipfest 2015.

Every year, Chipfest serves as the final concert for the seniors. Andrew Kilman ’15 reflected on his time with the Bison Chips which eventually resulted in his position as leader.

“I grew up with these seniors; I watched them turn into men before my eyes. To see the passion they showed at Chipfest was unparalleled to anything I’ve ever experienced at Bucknell,” Kilman said.

This edition of the annual show began with Jaewon Park ’18 singing his rendition of “Soul Man” by Sam & Dave. The following two convincing and highly emotional performances saw Rodney West ’17 take the stage to sing “Rich Girl” by Hall & Oates before the group’s leader, Kilman, sang Electric Light Orchestra’s “Evil Woman.” The rest of the first half of the show included performances of “Your Man” by Will Smart ’15, “Lonesome Road” as performed by the whole group, and “River of Dreams” by Tom Kroszner ’16.

“They have a really good stage presence that keeps their performances fun and the audience engaged,” said Sam Rabinowitz ’17. “What stood out would be when Eric Gowat ’17, Kilman, and West flirted with the audience by dancing and showing they were really enjoying what they were doing, subsequently making the audience enjoy what they were seeing. Their show also did a great job showcasing all of their members, because each one of them is talented yet unique.”

Penn State’s all-female a cappella group, Savoir Faire made the trek over to perform during intermission. Following their performance, Connor Small ’15 got the crowd going with a beat boxing medley solo before the rest of the Chips reentered.

The second half of the show began with Jason Derulo’s “Talk Dirty” as performed by Robbie Johnson ’16 and Brendan Trybus ’18, featuring a rap solo by Tom Murphy ’17. Next, Sam Cohen ’17, George Beatty ’15, and Will Frost ’18 took on “Carolina in My Mind,” and Small and Murphy wooed the crowd with their cheeky performance of “Blank Space.” To close the show, Trybus sang his well-received rendition of “Latch” before the final lineup of “Go the Distance” and their two traditional closers.

Small lamented on his last Chipfest following the performance.

“All night there was magic in the air. From the moment we jumped on stage we felt a forceful connection with the audience that permeated the entire performance. In short, we had an excellent time!” Small said.