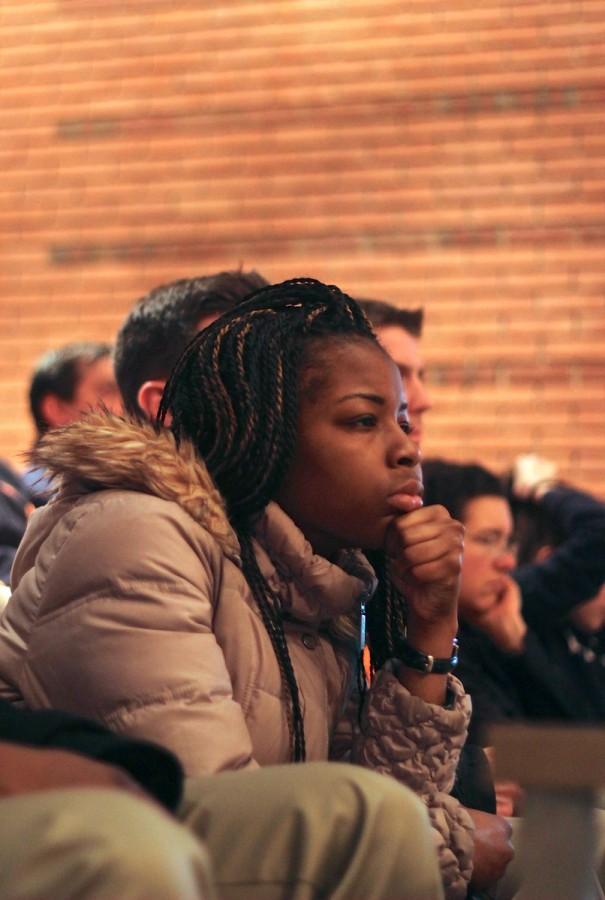 An open forum was held in the student space of the Elaine Langone Center regarding the recent incident involving racist, violent language on broadcast by now-former students on the University’s radio station on March 20.

“If you hear something and you know it’s wrong, say something. If you don’t, it’s just going to keep happening,” Felix Darko ’16 said.

“I don’t even feel safe this weekend. Are we just supposed to take these insults? I am sick and tired of this,” Amarachi Ekekwe ’18 said.

Mahder Etuma ’16 said that this is not an isolated incident, and some students are struggling with similar situations they do not make public.

Chief of Public Safety Steve Barilar, who offered his personal phone number to any students who felt threatened, said that the University could only do so much if students don’t speak up and tell officials about the issues.

“If someone calls in and says something that we need to know, we will do our job,” Barilar said.

Associate Dean of Students Amy Badal said that contacting one of the deans that is on-call 24/7 or Public Safety is the best way to approach a situation.

“You have the right to be angry … We need to create a system where people don’t feel fear to speak out,” Director of Civic Engagement & Service Learning, Janice Butler said.

“This is intolerable and not who we are. We cannot let this define us,” President John Bravman said, who opened the forum.

“This is not what defines WVBU either. The members of the staff are as frustrated as anybody else,” Lee said.

The entire WVBU staff was present at the forum in support of the hurting community members.

Director of Campus Activities & Programs Michael Duignan stressed the importance of education and clear communication when speaking out.

“It is important that when you approach someone for what they have said that they don’t feel attacked, but they feel educated,” Duignan said.

University Chaplain John Colatch said standing up and speaking out is a no-brainer if we care about our family and friends who are hurt.

“You should take a stand out of love for your friend,” Colatch said.

A Bucknell Student Government (BSG) email sent to the student body also highlighted the role of the individual.

“We must recognize that we are all a part of the problem, but more importantly, that we can all be a part of the solution,” the email said.

Badal notified community members about the event the day before via email. The forum attracted about 100 students and faculty members.