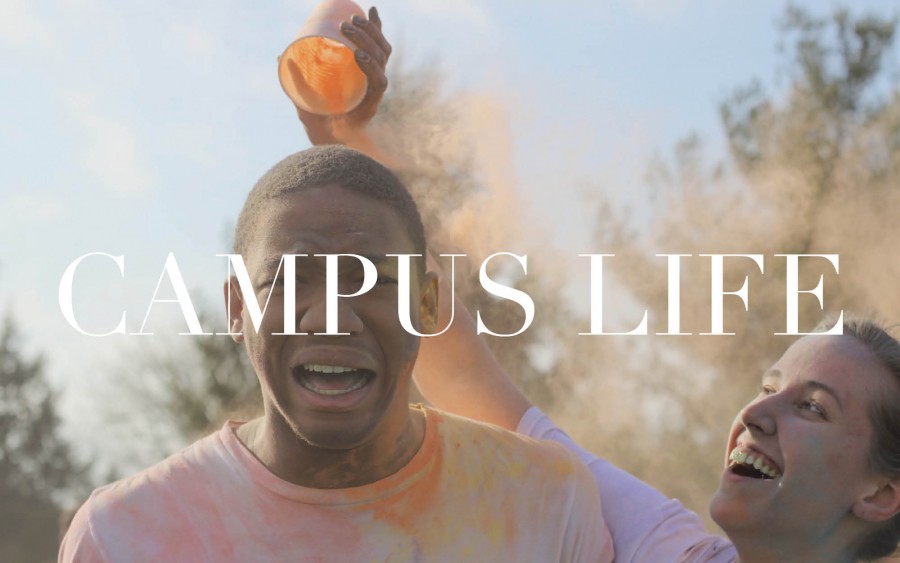 Color filled the air on April 10 as students came together to participate in Holi, the Hindu festival of colors and the opening ceremony of the University’s student-run event, Culture Shock. The event, which began with Holi at 5 p.m. and picked up again at 8 p.m. in the LC Student Space, brought together a variety of student organizations, cultural dishes and crafts. Spearheaded by Activities & Campus Events (ACE), it came to fruition with the combined efforts of the Caribbean Students Association (CSA), Students for Asian Awareness at Bucknell (SAAB), Japan Society, Gender & Sexuality Alliance (GSA), South Asian Student Association (SASA), and Bucknell’s Africa Student Association (BASA).

“This is a really cool event because all of these organizations are together and supporting each other,” GSA member Taryn Urban ’18.

The main event featured tables staffed by the various organizations involved, at which students did crafts such as painting paper lanterns, decorating mirrors, and puffy-painting organization t-shirts. All of this took place as student groups performed dances at the front of the room. Afterwards, everyone was seated for the feature performance of the night: a one-man show called “Me, My Mom, and Sharmila,” written by Fawzia Mirza.

Overall, the event, which was designed to celebrate the University’s diversity and share aspects of the various cultures present on campus, had a good turnout, especially during the Holi portion. While ACE has done some inter-organization collaboration in the past, this was the first time that they brought so many different clubs together for a single event.

“It’s convenient because [ACE is] such a big organization. It started out kind of vague and hectic and we didn’t know exactly what to do, and then it all finally came together, pretty recently actually,” President of the Japan Society Xavier Langford ’15 said.

While the event was very much a trial-run in this way, everything went relatively smoothly. ACE has been working towards running more collaborative events for a while, and hopefully after the success of Culture Shock, students begin to see an increase in them. Culture Shock may show up again next year, or even potentially become an annual event.

“There were a lot of moving parts, but the partnership worked out well. It’s here and now, and it’s all come together,” Rose Saville-Iksic, the graduate assistant at the CAP Center, said.

Beyond just bringing organizations together, the event also succeeded in drawing in students to recognize and discuss differences. Nikki Lazarus ’17, the ACE Executive Board member in charge of the event, mentioned that it ties in well with the current campus focus on issues concerning diversity and acceptance. Along with the BSG-run Solidarity Ceremony and other such discussions, Culture Shock acted as a great venue for students to come together to share their stories and learn more about their peers.

“We started planning for this event long before the recent events that conspired on campus, but it just goes to show how important events like Culture Shock are, and we really should have more of them … Students had a really insightful conversation about the meaning of diversity and the issues of race and gender in today’s society,” Lazarus said.