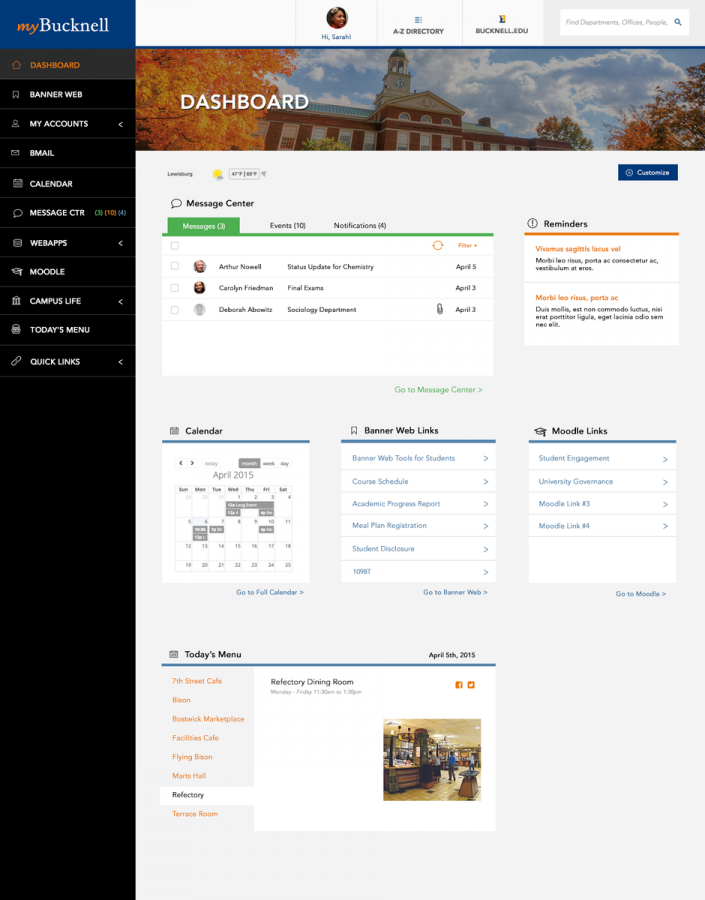 In August 2015, the myBucknell intranet portal will have a new look. Students may have seen messages sent from Vice President for Library & Information Technology (L&IT) Param Bedi, asking about the current features that were most liked. This Qualtrics survey was then used to generate a heat map to influence the development of the new version.

“The technical and project teams have been busy … The new portal interface will be in place August 2015. The technical team has mocked up a design concept that is being used during development,” Project Manager of L&IT Susanna Jackson said.

“The current portal is very data dense with many links, forms, and reminders. Our current license with Ellucian for the Luminis portal software is ending at the end of the year. We could have just swapped out the software, but we have the capability to develop it in-house and not spend hundreds of thousands of dollars,” Jackson said.

By the second or third week of April, a preview of the new portal will be released. The current preview is not tied to a back-end but the new portal should have improved search, directory, events calendar, and course information search. Throughout the following months up until July, there will still be more communication with testing. Additional feedback will be obtained through focus testing and student advisory groups. The last steps involve the migration to the new portal and ensuring any current important links are kept in the new version.

At minimum, the portal will have the capabilities it has now and there will be more opportunities to innovate and build on top of it, instead of using expensive, large proprietary software.

The Message Center will also be re-envisioned, making sure the end result will be responsive. The system will also allow administrative members to be able to push content without involving too many other members. It will have the same visual feel to the front-facing University website, but it will not have the same design.

“We will also have better control of analytics and usage and can adjust to actual traffic,” Jackson said.

Web Development might release Vine videos to demonstrate how to navigate the new portal. In the end, myBucknell should be intuitive and shouldn’t require training sessions.