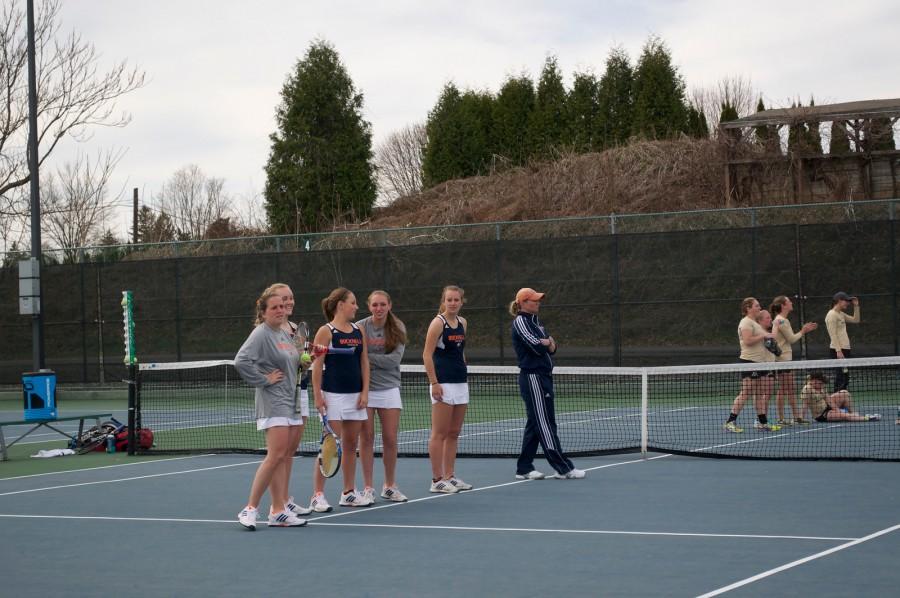 Maria Cioffi ’16 and Madeline Melch ’18 took victories in singles play against Loyola. The Bison fell to Loyola in doubles play, but Cioffi and Stephanie Pino ’16 took the doubles victory at No. 2. Cioffi was the only victor for the Bison against Navy, continuing her winning streak.

“Maria is always one hundred percent prepared to give everything she’s got in every single match,” head coach Rebecca Helt said. “She has struggled in the past against Megan Hahn from Loyola and this weekend, Maria rolled past her with ease. Against Navy, she fought for every single point in that match and you could just see that she was determined to be victorious.”

Against Lehigh, Cioffi continued her winning streak, winning No. 1 singles 6-3, 6-2. After her eighth straight win, Cioffi improved her personal record to 10-6. Lisa Jouravleva ’18 and Michele Urbinati ’17 both also had wins for the Bison. Jouravleva took the No. 2 victory, beating her opponent 6-3, 6-3. Urbinati came out victorious with a score of 7-6 (3), 7-5 at No. 3. The Bison fell to Lehigh in doubles play, costing them the match.

“The matches this weekend were supposed to be our opportunity to take one more step toward the Patriot League Tournament,” Helt said. “But after a week of rain and nowhere to practice for days leading up to the weekend, we just weren’t prepared for a match we should have won.”

Cioffi took a win at No. 1 against Army, defeating her opponent 6-2, 6-4.  She finished at 6-0 against opponents in the conference. Prior to the match, the Bison honored seniors Alyssa McAndrew ’15 and Christie Schneider ’15 for Senior Day.

The Bison ended at 2-4 in the conference. The Orange and Blue will finish their regular season April 18 with a nonconference match at IUP and continue to prepare for the Patriot League Tournament.